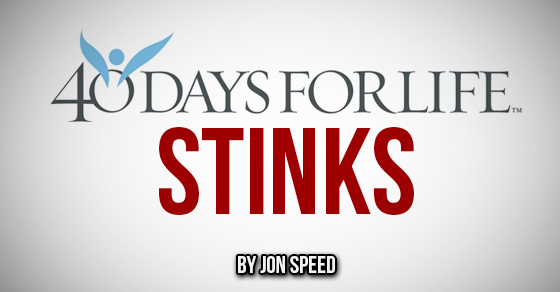 There. I said it.

Let the evangelical world hear this loudly and clearly: 40 Days for Life is not a Christian organization.

I know there are some professing Christians involved. I understand that it’s supported by 16,500 churches. I think it’s religiously motivated. And I also know that although it has been mainly a Roman Catholic initiative that it’s also supported by some evangelicals.

However it is unchristian on a foundational level.

40 Days for Life leaders oppose preaching the gospel at the clinics.

I have met with the local coordinators of 40 Days here in Syracuse for coffee. I’ve also interacted with them on the front lines of the Planned Parenthood here. I’ve discussed this issue with them directly, so this isn’t something I’m just pulling out of my hat. If you show up and preach the gospel and they are present, they will try to stop you. When they start they will be nice about it and try to recruit you. If you are persistent they will become passive aggressive or just plain aggressive.

They will point to pragmatic reasons, saying that their methods have worked (they claim more than 8,000 lives saved thus far on a global level). When women come for abortions they speak so quietly that it is not an exaggeration to say that if I am standing next to them, I cannot hear them (WITHOUT anyone from our team preaching in the background).

There’s another name for this and it’s not Christian. It’s humanism. According to the New Catholic Encyclopedia, The term humanism has a number of more or less distinct meanings, all referring to a world view in some way centered on man rather than on the suprahuman or the abstract. It goes on to discuss Sartre’s brand of humanism, existentialism, and defines that as ‘a view of life centered on man conceived of as creating himself for himself in his own system of values. The term secular humanism is often used for this and various other systems of thought that propose purportedly integrated views of life which, often in a highly polemic spirit, exclude belief in the existence of God (W.J. Ong Humanism Volume 7:215).

Another central element of the Enlightenment version of humanism was its emphasis on reason, unaided by the Word of God. At times the Enlightenment did no more than merely rationalize theology in favour of or in opposition to religion (Hecker, Konrad Humanism in Sacramentum Mundi, volume 3:75). As such, humanism had nowhere to go but to the existential, atheistic version we have today. In spite of the emphasis on prayer and fasting in 40 Days, the emphasis on appealing to abortive parents on the basis of non-confrontation is an appeal to what the parents want outside of God and His specific revelation in the Word of God. Therefore, the pro-life movement will gladly welcome anyone who is against abortion, even if they are atheist, as we witnessed in the 2013 March for Life in Washington, D.C. while filming the documentary Babies Are Murdered Here. The exclusive claims of the gospel on the sinner do not matter in these kinds of ministries because God and His clear statements on the issue are an afterthought if they are thought of at all. 40 Days for Life is an exercise in Christian agnosticism philosophically and practically speaking. It is patently unchristian in a historical and theological sense.

As to what works, what do we do if I can introduce you to individuals who have hundreds of saves to their credit who confront at the clinic? How do we evaluate what is the right way or the wrong way to go about this ministry? We can play dueling banjos with our statistics or we can appeal to a higher authority. [BTW, ironically, statistics are not the friend of 40 Days if you compare them with the statistics of gospel-centered abortion clinic ministries. ] The higher authority we appeal to is the Word of God. And that Word, the Bible, makes it very clear that when we are dealing with the lost our responsibility is to declare truth. Faith comes by hearing and hearing by the Word of God (Romans 10:17). Those who think that preaching is foolishness may think so because they themselves are lost (1 Corinthians 1:18). Christianity is based upon the foundation of truth. The word gospel presupposes something to be declared and believed. 40 Days ignores it.

Therefore it cannot be called Christian.

Awhile back Abby Johnson advised her followers on Facebook that it would be a fine idea to dress differently or in some way distinguish oneself from conscientious Christians at the clinic. You wouldn’t want to be thought of as whacky as someone who preaches the gospel, would you? To which, my reply is don’t worry about it. When Christians show up preaching the gospel, your people won’t need to be coached to separate. Their response to the proclamation of the gospel is reminiscent of what happens when a light is turned on in a room full of cockroaches. They scurry away. They hate the light. Or, as in one case here in Syracuse, they will hop up and down in your face and yell at you to shut up.

Evangelical support of 40 Days is an oxymoron. There is no magic pixie dust that the Roman Catholics have that they’ve gotten by being at the abortion clinics longer than we have. It’s not distributed in vials. There is, however, a latent power in the Word of God that’s been ignored by the pro-life community for many years. Maybe, just maybe, that is one reason why we’ve had 41 years of slaughter in this country. It seems I remember Someone saying something about it being the truth that sets someone free.