Getting a Seat at the Pro-Life Table: A Response to Clinton Wilcox and Jill Stanek

Home / Articles / Getting a Seat at the Pro-Life Table: A Response to Clinton Wilcox and Jill Stanek
Articles
Mar 12, 2014Sep 3, 2020By Jon Speed0 likes
0shares 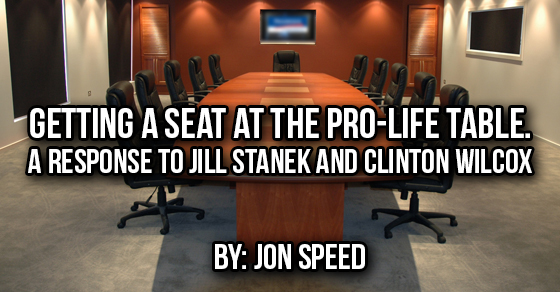 UPDATE: During the time of writing this blog, Clinton Wilcox posted a response to his first post admitting that he has never seen Babies Are Murdered Here and should not have made the comparison. He has since from as far as we can tell, seen the first twenty minutes. In his response he claims we only offer condemnation to women who have had abortions. This is an outright lie and anyone who has seen the entire film can point to the fact that in the entire arc of the film, towards the end, grace and mercy in the cross of Christ is clearly presented. It’s just as dishonest to speak about a film you have not seen to present misinformation from not watching the entire film.

It’s hard to get a seat at the proverbial table if the best your critics can do is hurl a guilty by association label at you while never taking the time to study your message.

Clinton Wilcox, in his recent response to my article, Forty Days for Life Stinks, does just that (the guilt by association thing, not the repentance thing). In that article he makes the claim that I never provided a shred of evidence that the leaders of Forty Days for Life oppose the preaching of the gospel at the clinics.

Really? Did he even read the article? Or maybe by proof he means documentation of the conversations that we have had with the 40 Days for Life leadership here in Syracuse and staff of the local crisis pregnancy center? Well, Clinton, I wasn’t wearing a wire that day so we didn’t get that documentation for you. Sorry.

He then makes the statement that we aren’t affiliated with Abolish Human Abortion (he assumed we were in the comments section of our blog until I corrected him). In spite of that admission, he proceeds to cite an AHA video as proof of our methodologies. Huh? This is ridiculous. Especially since our documented differences with AHA are about a year old now. It would have made as much sense to show a video of the Westboro Baptists as proof of our methodologies. I mean, if you’re going for guilty by association, you may as well go big, right?

Speaking of documentation, Wilcox admitted on a public Facebook discussion that he had never seen the documentary Babies Are Murdered Here before he wrote the blog response. He admits in the response he has never seen any video of our interactions at clinics. So it begs the question, how does this guy know what we do? I’m pretty sure I’ve never seen him at the clinic we go to here in Syracuse, NY. 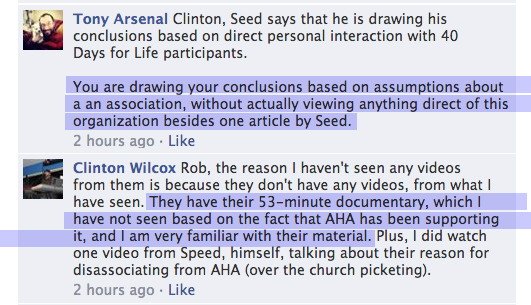 In spite of Wilcox’s absolute train wreck of a response, Jill Stanek’s blog decided to share Wilcox’s response as representative of us and the documentary and made an editorial comment that reads thusly:

“The pro-life movement will never succeed as long as there are extremists who are trying to drive a wedge into the pro-life movement, dividing us, and playing into the hands of the pro-choice movement by embodying all of their stereotypes (that pro-life people are only interested in condemning women for having abortions, that they are just belligerent loudmouths, and that abortion is a religious issue). We need a better way to operate, and we need to be united.”

Notice that this representative of the pro-life movement (the author is credited as Susie Allen, author of the blog Pro-Life in TN) does not want abortion to be considered a religious issue, someone who calls for pro-lifers to preach the gospel at the clinics is an “extremist” and a “belligerent loudmouth.”

If nothing else, I’m thankful that they are so willing to prove the point about the modern pro-life movement being an essentially humanist enterprise. And no, Clinton: praying in front of clinics does not make the movement Christian. People in every religion pray. And the pro-life movement has made it crystal clear that religion doesn’t matter as long as you are pro-life. Again, it’s humanism. Humanism with a thin veneer of religion, but humanism nonetheless.

The message is clear from the pro-life movement: if you plan on preaching the gospel in front of a clinic, you’re not wanted. If you are an evangelical and pro-life read the previous sentence twice and think about what that means. If you are a pastor who cares about the gospel and you support ministries which are dubbed pro-life but which neglect the gospel, keep it in mind the next time you review your annual budget.

Also take some time to think about what it means that Jill Stanek and friends would rather take the word of a guy who had not seen the documentary as authoritative. The leadership of the pro-life movement seems to be absolutely ignorant of what we are trying to say and they have adopted the ignorance is bliss philosophy. Babies Are Murdered Here may be the most hated pro-life documentary in the pro-life movement while at the same time being the least watched documentary in the movement.

Click here to see the entire conversation from Brian Wilcox testifying to his complete ignorance of Babies Are Murdered Here.

And here is the full film of Babies Are Murdered Here, for those who have yet to actually watch it.
)