In Which President Obama Becomes a Radical Pro-Lifer 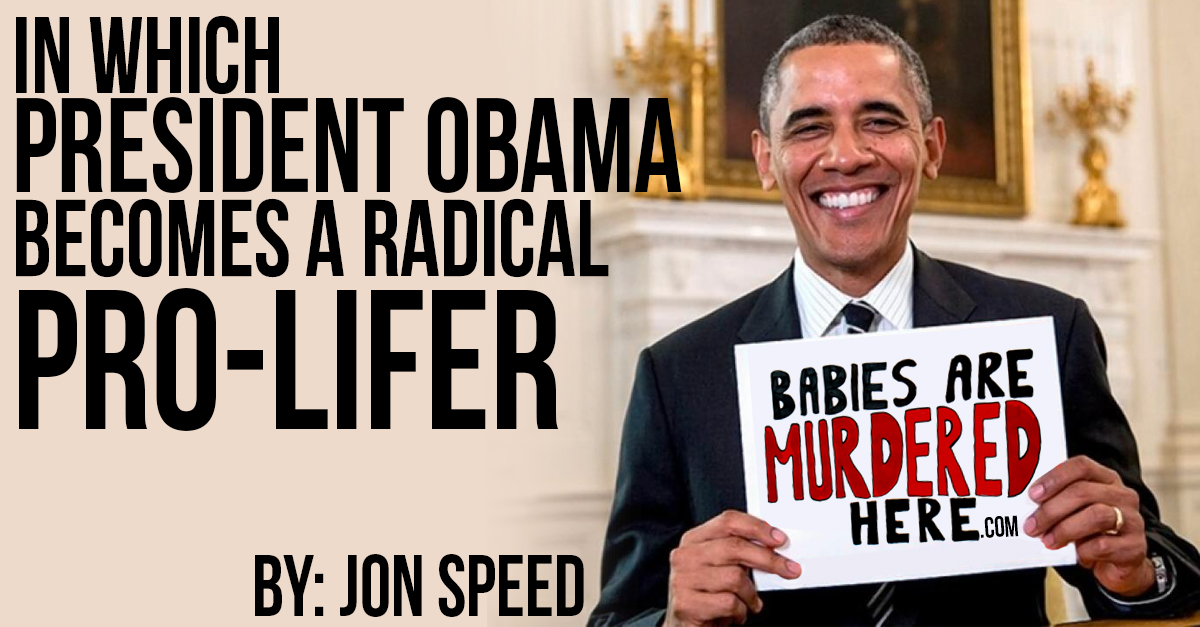 On Friday night as I was working on my sermon, I had the NPR station on rocking some classical music when the station took a break from its programming to give us the news. The piece was on the reaction over the botched execution in Oklahoma of Clayton Lockett. Lockett and two accomplices kidnapped Stephanie Neiman and two other people. In the process, one of the other people was raped by Lockett and company. Lockett then shot Neiman twice and buried her alive. Her grave was so shallow that one of the responders reported that her toes were sticking out of the ground. She must have died slowly. Neiman was 19 in 1999 when her life was ripped from her by this murderer.

The news piece was not about the horror of the original crime. It was not really even about the fact that Lockett died of a heart attack 43 minutes later rather than quietly on the table. It was about our President’s reaction to the botched execution. [Actually, it wasn’t botched. Lockett’s death was mission accomplished. He’s dead.] President Obama said he was deeply disturbed over the story. In spite of the fact that our judicial branch of government has heard the facts of the case long ago, sentenced Lockett to death, and carried out the penalty of the law on the state level where such things are decided, the executive branch of our government decided to forego all of that and make some pretty serious comments about the idea of forming some kind of committee on the federal level to apparently discuss whether or not the states should be carrying out executions and whether or not their decisions are just.

There are two things going on here politically. The first is a potential violation of the separation of powers, which President Obama has had no problem ignoring since he has been voted in office. The second is a potential violation of the right of states like Oklahoma to govern themselves, which the Supreme Court has been ignoring by overturning various state laws on issues like homosexual marriage and abortion. We may as well face it. Separation of powers is dead or dying.

This article is not really about that; I’ll leave that to our very busy yet extremely talented writer here on Gospel Spam, Terrence Daugherty, to comment on the political issues in this story if he so chooses since that’s his beat. What really bothered me here was something that NPR reported that was not included in most other media outlets.

Yup, you heard it here first’or maybe second if you listen to NPR (you certainly didn’t hear it on Lifesite News)’but President Obama said that he believes the death penalty should be enforced in two situations.

The first is in the case of mass murder. Because, you know, the rights of one individual do not matter nearly as much as the collective. We can throw the individual out of the lifeboat if it means saving everyone else in it. The second is in the case of the murder of children. So we learn that President Obama is not a total hypocrite by upholding the death penalty since he’d love to see it in the case of the Boston bombers and incidents like Newtown.

Wait a minute. Maybe he IS a total hypocrite.

Think about this. The self-proclaimed abortion president just said that he supports the death penalty in the cases of mass murder and the murder of children. The Church has long been thought to be weak because it is hypocritical. President Obama’s statements prove conclusively that the Church has no monopoly on hypocrisy. Our illustrious President has thrown his hat into the ring with panache. Abortion in the numbers that the United States of America does it is mass murder of children in the womb.

Since production of our documentary on abortion called Babies Are Murdered Here started in late 2012, we’ve been saying that abortion ought to be criminalized. We even sold shirts promoting the idea. At first it was surprising to discover that the pro-life movement opposed the idea if you apply it to men and women who pay for their children to be murdered. Others oppose it in the cases of abortionists themselves. It became less surprising later when we were about to release the movie that some ministry leaders who are pretty conservative theologically and politically asked us to consider editing the movie to remove a reference to the death penalty and abortion. Ironically, the most liberal President we have ever had, the abortion president, agrees’at least in principle’that mass murderers and murderers of children ought to get the death penalty.

The man is a pro-life visionary. Maybe even a radical. Someone ought to put him on some kind of watch list so his thugs at Hydra can keep an eye on him.

Of course, he’s not consistent’that’s the earmark of the hypocrite. President Obama will never consider the mass murder of babies in the womb as worthy of the death penalty. In fact, he will do all he can to support it. He calls the leaders of Planned Parenthood heroes and installs pro-death justices on the Supreme Court. He has designed legislation (and now law) in Obamacare that funds and requires conscientious objectors to fund abortion.

However, if he was consistent he would be right. Abortionists and those who pay them for services rendered ought to get the death penalty.

The fact that this kind of statement bothers conservative evangelicals who read this blog shows how Biblically illiterate most of evangelical Christianity is these days. The death penalty was instituted by God in the first book of the Bible, right after Noah got off of the boat (Genesis 9:6). In the Mosaic Law, the parameters of the death penalty were outlined. In those parameters the accidental death of a baby in the womb as two men fought was given the death penalty (Exodus 21:22-25). When the covenant people of God, Israel, executed their own children on the altars of Molech, God retaliated with judgment from pagan nations which included military action involving the deaths of many (Psalm 106:40-42).

The fact that the death penalty was never repealed by Biblical law is lost on most modern believers. In the defining event of Christianity an innocent Man\God in the flesh’Jesus’submitted Himself to the Roman death penalty as a substitutionary sacrifice for the sins of His people. He did not utter one word about His own innocence nor did He protest the death penalty as something barbaric. Jesus, as the only innocent Man who ever lived affirmed the death penalty even as He faced it. But He went further than that. In His conversation with Pilate Jesus acknowledges the God-given right of Pilate to wield the death penalty in John 19:10-11. It’s interesting to note that Bible scholars as varied theologically as John Calvin, Karl Barth, C.K. Barrett, Godet and Westcott (Baker, William H. Worthy of Death 63) all agree that this text is stating that Pilate got His authority to execute the death penalty from God.

In addition, in Matthew 26:50-52 as Jesus was being arrested in Gethsemane Peter cuts off Malchus’ ear.Ai?? Jesus rebukes Peter not just by healing Malchus, but by stating specifically, “…for all they that take the sword perish with the sword.”Ai?? This is more than a broad spiritual principle; this deals with a specific incident.Ai?? Peter was not aiming for the ear (if he was he was a pretty good swordsman); he was more likely trying to take off his head.Ai?? Jesus’ rebuke here is a warning that holds good for anyone who wants to seek personal revenge with violence.Ai?? As Baker explains it, “To take up the sword as an instrument of murder is to subject oneself to the death penalty at the hand of the magistrate” (57).Ai?? Jesus is acknowledging here the right of the government to punish murder with the death penalty.

The Apostle Paul elaborates on this concept even further in Romans 13:1-7 where he states that the government functions as a sword bearer against those who do evil (verses 3-4). Dr. George B. Cheever, an abolitionist of the 19th century and pastor of The Church of the Puritans in New York City wrote in 1849 about the common objection to the death penalty by those Christians who suggested that the law of love that Jesus taught was in contradiction to such punishment. Commenting on Romans 13:1-7, Cheever pointed out that the section starts in verse one with an admonishment towards personal forgiveness while in the same section Paul speaks of the role of the government to exact vengeance on those who do evil. Cheever says, Capital punishment then, and the mild spirit of the Christian Dispensation are not incompatible, but consistent (Punishment By Death: Its Authority and Expediency page 149).

By the way Romans 13 makes this clear that the government ALONE is authorized to carry out the death penalty. Vengeance is the Lord’s; it does NOT belong to vigilante justice carried out by some equally murderous pro-life radical. Such a renegade deserves the same death penalty that he metes out to others, and that death penalty carried out by the State.

Yes, President Obama, we agree that the death penalty should be given to those who murder children.

[Grab a load of this - what I collided with on the www. Would like to see reactions to it.]

The Obama Cabal is behind universal GAYety with a "forever" postage stamp glorifying Harvey Milk, a Jewish homosexual predator "attracted to boys aged 15-19," according to WikiAnswers! (Also see Wikipedia.)
Global gaydom was even predicted by Jesus (see "days of Lot" in Luke 17 and compare with Genesis 19).
And the Hebrew prophet Zechariah (14th chapter) says that during the same end-time gay "days" ALL nations will come against Israel and fulfill the "days of Noah" at the same time (see Luke 17 again) - a short time of anti-Jewish genocide found in Zechariah 13:8 when two-thirds of all Jews will die.
In other words, when "gay days" have become universal, all hell will break loose!
Shockingly, the same "days" will trigger the "end of days" - and when they begin, worldwide human government will quickly wind down in just a few short years! For the first time in history there won't be enough time for anyone to even attend college, let alone have a family, save money, enjoy retirement, etc.
One final thought. The more we see gays "coming out," the sooner Jesus will be "coming down"!
For more, Google or Yahoo "God to Same-Sexers: Hurry Up," "Jesus Never Mentioned Homosexuality. When gays have birthdays...," "FOR GAYS ONLY: Jesus Predicted...," "USA - from Puritans to Impure-itans!" and "The Background Obama Can't Cover Up."

I agree with this additional thought:

We bandy the idea of "an eye for an eye," but your citation of Ex 22 is the only mention it correctly applied. Imagine if that carried through and was used as punishment for abortion providers.