This morning after I took care of some preliminaries, I sat down to my computer to login to Facebook and see what’s going on. I’d been off line for awhile since I fell on Tuesday and sustained a minor concussion. Which, by the way, is no fun. I’m feeling better today, I can focus, and it’s a good thing too. Woodchuck!

Anyway, Facebook had logged me out and I had to re-sign in. When I did I received a message from Fakebook that said that I am temporarily banned for 12 hours from posting on my account because something I had written about a week ago violated Facebook’s agreement. Since they are so helpful and all, they included the original quote, which was written in a thread on abortion. If memory serves, my response came about because someone said, “If abortion is murder, then someone should call the police at the abortion clinics, not just protest them.” I responded, “[Name withheld], the police do not intervene for the same reasons that the police did not intervene to stop the Jewish Holocaust in Nazi Germany. Like abortionists, everything Hitler did was legal.”My response is what Facebook sent me as proof of my violation of their terms of conduct. I sent them a reply protesting (I’m Protestant, that’s what I do) the ban but I have not heard back from them as of the time of this writing. 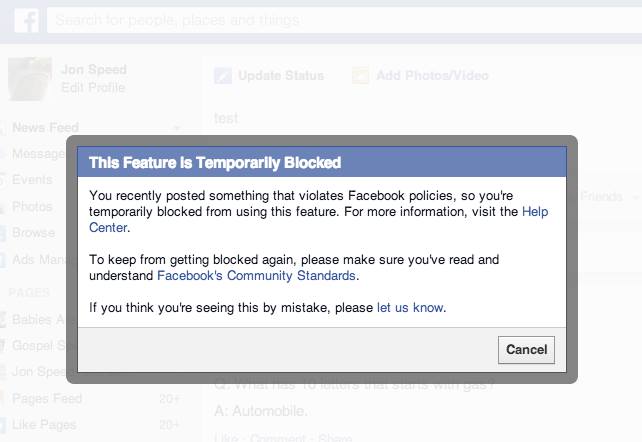 If this is hate speech, then the quote I am alluding to from Martin Luther King, Jr. is also hate speech. MLK Jr. wrote to clergymen who disagreed with his civil disobedience from the jail in Birmingham, AL:

We should never forget that everything Adolf Hitler did in Germany was “legal” and everything the Hungarian freedom fighters did in Hungary was “illegal.” It was “illegal” to aid and comfort a Jew in Hitler’s Germany. Even so, I am sure that, had I lived in Germany at the time, I would have aided and comforted my Jewish brothers. If today I lived in a Communist country where certain principles dear to the Christian faith are suppressed, I would openly advocate disobeying that country’s antireligious laws. (http://www.africa.upenn.edu/Articles_Gen/Letter_Birmingham.html).

King obviously is referring to the unjust laws of our land which made it legal to oppress a man because of the color of his skin. In this nation, the Jim Crow laws were once legally supported. Making a man or woman sit in the back of a bus or drink at a different drinking fountain because of the color of his skin was legal. It was legal to keep African Americans from voting.

Just as it is currently legal to murder babies in the womb.

The point is so simple a child can follow it: legality does not define morality. A child can follow it, but apparently Facebook cannot. Mark Zuckerberg, was Martin Luther King Jr. guilty of hate speech? Would he be banned from Facebook for equating racism with Nazi Germany?

I do not live in Nazi Germany. Neither do I live in the former Soviet Union. I live in the United States of America where we have slaughtered somewhere around 60 million babies in the womb. I am doing all that I know to do in my historical context: preach the gospel at abortion clinics. Co-produce a movie calling Christians to do the same. Rescue the perishing and care for the dying.

Abortion is murder. God valued life in the womb so much that he prescribed the death penalty for a man who fought with another and in the process injured a pregnant mother so much that she miscarried (Exodus 21:22-25). God originally prescribed the death penalty because of the fact that man is created in the image of God (Genesis 9:6). Just as the Nazis used propaganda–some of it scientific for its day (eugenics)– to persuade the German people that Jewish people were sub-human, so the pro-choice lobby has done the same thing here with abortion. The propaganda does not change the reality of murder in the womb.

If Facebook is now calling it hate speech to equate our modern Holocaust of abortion with the Nazi Holocaust the public discourse on the institution of abortion has taken a drastic downturn. It is reminiscent of fascist efforts to silence opposition wherever fascism has reared its ugly head. This policy may be indicative of where our culture is headed in regards to free speech. If it is, we should all be driven to our knees in prayerful repentance. It’s not enough to curse the darkness. We have to be light.

Be sure to share the film, Babies Are Murdered Here to voice your disapproval with their biased blocking of Christianity.