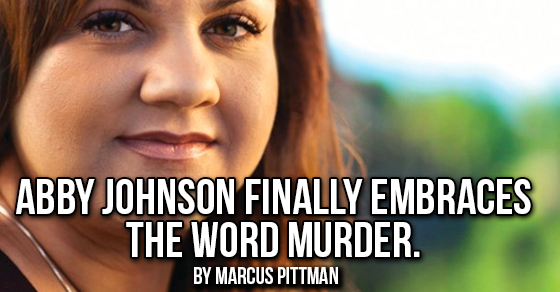 Abby Johnson, one of the leaders of the Roman Catholic pro-life movement, initially opposed the message of Babies Are Murdered Here. When the film was being produced there were many interactions with her, most of which consisted of her disgust in us actually using the term murderer to describe the action of those who murder their children.

While we were filming, we had many discussions with her, some privately, some publicly about using the word murder to describe abortion. She strongly opposed it. In fact, most of her opposition to the film was because she couldn’t stand the idea of being out at the clinics and speaking the truth to what abortion really is. Perhaps this was because she knew that using the term murder would simply result in her having to label herself as a murderer.

But now the film has been out for a few months. The damage has been done, and murder is now part of the pro-life vocabulary. All though we don’t ever expect to be credited for this sudden change in vernacular, we will happily take all the credit. The evidence is out there. When abortion is finally ended, history will show that it was the use of proper Biblical language that caused abortion in America to end. This rise of using proper terms like murder will easily point back to our film: Babies Are Murdered Here. After all, that is what the film is about.

Which brings me back to Abby Johnson. Yesterday in a post on Facebook, Abby Johnson-for the first time I can possibly recall-used the term murder to describe abortion. 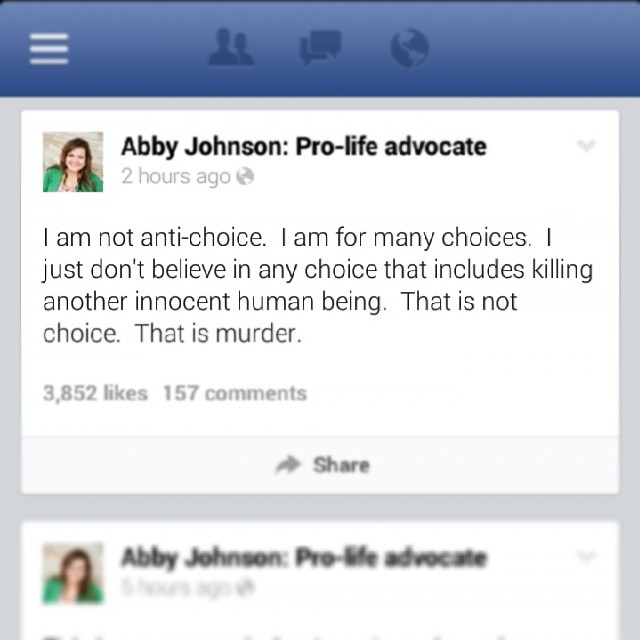 I am not anti-choice. I am for many choices. I just don’t believe in any choice that includes killing another innocent human being. That is not choice. That is murder. – Abby Johnson

This might seem as if she is stating the obvious. I mean, after all, isn’t that why we oppose abortion in the first place? But if you watch Babies Are Murdered Here you will see a cameo of Abby violently defending her opposition to the term. In the film she says the following:

There were people out there who were screaming at the women telling them they were murderers and that they were going to hell. I know that what they’re doing is wrong. These were supposed to be the Christians. This was before 40 Days for Life. – Abby Johnson, Babies Are Murdered Here.

The reason is because Babies Are Murdered Here has changed the conversation of the pro-life movement. But they will never blame us for the change. To do so would mean that they are wrong. It would mean they would have to publicly repent for their bubble gum and ice cream approach to abortion. It would mean that Babies Are Murdered Here would be given a seat at the pro-life table, and well, that just can’t happen. Protestants must never be allowed to speak on behalf of the pro-life movement. This is the Catholics’ Vatican ground.

For those of you who don’t think this single status by Abby is that much of a big deal, let me point you to what the Catholics, who oppose this use of language, said to Abby on her own wall. 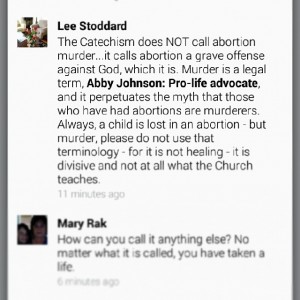 The Catechism does NOT call abortion murder…it calls abortion a grave offense against God, which it is. Murder is a legal term, Abby Johnson: Pro-life advocate, and it perpetuates the myth that those who have had abortions are murderers. Always, a child is lost in an abortion – but murder, please do not use that terminology – for it is not healing – it is divisive and not at all what the Church teaches. – Lee Stoddard

This issue-that the Catholic Church refuses to call abortion murder, and those who do it, murderers-was brought up during the very early stages of Babies Are Murdered Here.

Here is one of the first trailers for Babies Are Murdered Here that was made from interviews with Roman Catholics at the March for Life on this very issue.

But what is the reason for this? The reason is just as Lee said: to call abortion murder is to call the women who have them murderers, and this means there is a lot of excommunication that needs to happen for these mortal sins. If the Roman Catholic Church actually disciplined those who have had abortions, and removed them from Mass, then you would have a serious problem on your hands. Let’s just face it. A works-based religion like Catholicism can’t have a mass excommunication for bad works. It would destroy the religion at its foundation.

If you want a much more in-depth explanation of the theology behind the Catholic Pro-life movement, then read this article by Jon Speed on the Roman Catholic Catechism’s explanation of mortal sins, and how its view on victim-hood actually upholds what Lee is stating above. View that Article Here.

But in the Catechism, you can see the severe consequences of abortion being a mortal sin. The CCC states that: If it is not redeemed by repentance and God’s forgiveness, it causes exclusion from Christ’s kingdom and the eternal death of Hell’.

So I am glad to see that Abby Johnson has decided to use divisive language and call abortion just what it is. Murder. I think most importantly, we are beginning to see a shift in pro-life language. History will never allow the Catholics to be responsible for this. It is to late for them. The recent uprising in abortion ministry by the Protestants is clearly to blame, and it is impossible for history to prove otherwise.

But thankfully, you don’t have to be a Christian to embrace a Christian worldview or Christian ideas. God even uses pagans and Catholics who embrace the truth of Scripture, even if only intellectually, to change things for the better. And because of this, we can expect that one day babies will no longer be murdered here.