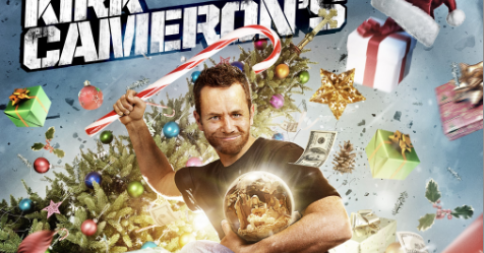 We’ve been on a bit of a hot streak at Gospel Spam lately.Ai?? We’ve gotten a few free screeners, an angry phone call from a producer of a bad Christian film, an interview with an Academy Award-winning director, a serious film maker’s request to review a script and a request for an interview with The Guardian.Ai??Ai?? Who’d a thunk it?

I’m not gonna lie’I expected a screener for Saving Christmas.Ai??Ai??Ai?? I was excited about this film.Ai?? Man, I was even using the hashtag to try to sell Christmas books out of my store on Facebook.Ai?? I WANT this movie to do well.Ai?? I would have loved the opportunity to help promote what I think is an excellent message’King Jesus owns Christmas.Ai?? I even took my kids trick or treating for Pete’s sake!Ai?? That’s a lot for a recovering fighting fundie.Ai?? I am on the side of the film makers.Ai?? In fact, I wasn’t entirely sure that I could write an unbiased review.

Last week I began to suspect that there might be a reason why we didn’t get a screener.Ai?? On opening night my suspicions were confirmed.Ai??Ai?? Yes, it was that bad.

I expected a somewhat sappy Christmas film.Ai?? I prepared myself by watching snow fall and listening to the radio station that’s already playing Christmas music 24\7.Ai?? No one faults sappy this time of year.Ai?? Elvis singing about how he wishes it could be Christmas every day of the year is considered classic Christmas music for crying out loud.Ai??Ai?? If I hear our local station play George Michaels’ Last Christmas one more time I’m going to hurl and it’s not even Thanksgiving.Ai?? People love sappy this time of year.

This movie wasn’t sappy in an Elvis sort of way.Ai?? It was just sad in a what could have been sort of way.Ai?? It’s just a bad movie that leaves you shaking your head as you leave the theater saying, What was that?Ai?? It had some very good moments, but strangely misfired.Ai?? While the main body of the movie makes some excellent points regarding how we should think about the nativity scene, the Christmas tree and St. Nick, those points are muddied by a sea of confusion.

The short list of things that confuse me, at least from where I sit tonight:

–In a cinematic presentation, why do we have to be treated to Kirk Cameron sitting in his living room having what appears to be (but most likely isn’t) an unscripted one-to-one conversation?Ai??Ai?? Is every movie we ever see with Kirk, post-Fireproof, going to include a trip to his living room or a reasonable facsimile thereof?Ai?? Is this the result of a focus group of middle aged female Growing Pains fans?Ai?? If you’re not sure what I’m talking about, recall the one night only Monumental and Unstoppable movie events.

–Either the writing was so bad in the opening sequence that the final product couldn’t be helped or they just aren’t good enough to rescue the script.Ai?? Regardless, the writing was stilted and the pacing of the movie was herky-jerky at best or slow to develop at worst.

–Speaking of herky-jerky what is the deal with the camera work in the kitchen scene during the opening of the movie?Ai?? Was it filmed on an iPhone?Ai?? Parts of that should have hit the editing room floor never to be seen again. Instead, we see it on the big screen.Ai??Ai?? I expect motion sickness on YouTube, not in a movie theater.

–The sub-plot involving David Shannon’s character didn’t do much to add to the plot beyond connecting conspiracy theorists to conspiracies about Christmas.Ai?? And perhaps some comic relief that wasn’t really that comic, which is a shame considering David’s talent.Ai?? Since actors can only deliver the lines that they are given I doubt this is David’s fault.

–What in the world does the dancing at the end have to do with anything?Ai?? Other than to showcase Darren Doane’s break dancing ability.Ai?? Which, by the way, is pretty darn good.Ai??Ai?? I don’t begrudge anyone a dance at the end of a movie’Johnny Depp’s Futterwacken at the end of Alice in Wonderland was perfect’I just don’t know why it has to go on for so long.Ai??Ai?? There comes a point where slow motion is overkill and Doane foundAi?? it and then did a jig on top of it.

This movie could have been saved if actors would stick to acting, directors would stick to directing, and some of the money was spent on hiring a writer.Ai?? I have made it my mission in life to beat this horse until it is worm-dirt: great films are made from great writing.Ai?? Great writing, among other things, is cohesive.Ai?? The writing here was a disjointed mess.

This can be explained away because of the attempt to mix documentary with a story line.Ai?? I don’t know if that ever works, but it certainly doesn’t here.

This message finds its inspiration in Biblical truth.Ai?? Isaiah 9:6-7, a Scripture which gets a lot of play this time of year, is rarely explained beyond verse 6.Ai?? Verse 7 makes clear that the Kingdom came with the birth of Jesus, that the throne of David was established at His first coming (cf. Acts 15:15-17) and that it’s increase is gradually moving toward the to the establishment of an endless Kingdom.Ai?? The church is being used by the Lord as part of that increase.

This movie acts on these convictions when it states that (despite pagan claims to the contrary) Jesus actually exercises His Lordship over the Christmas observance.Ai?? Producing such a movie and getting it into theaters is totally consistent with such a theology.Ai?? Secularists hate that message because they hate Jesus.Ai?? Christians hate that message because they like their pessimism, thank you very much.Ai?? The problem is that in this case we have a movie which is inadvertently attempting to prove the dispensational world view by delivering a movie which could be exhibit A in what it looks like when things get worse.Ai?? I don’t say that to be insulting.Ai?? I do say it to issue a challenge’people like us who believe that Jesus is King ought to be producing the BEST movies.Ai?? Instead, Dumb and Dumber To wins the opening weekend and as of this writing, Saving Christmas is sitting on #15.Ai?? Since this review is not being released until Monday we can’t even be blamed.Ai?? Every Christian ought to be disturbed by a triumphant message getting short shrift simply because of bad writing and questionable acting.

I often find myself angry at Christian film because the message that’s conveyed is built on pop-theology and is poorly done.Ai?? This time I’m depressed because the message of this film, as optimistic and excellent as it is, is with the very best of intentions, misrepresenting the excellence of Jesus Christ.Ai?? A good message done poorly is no credit to the message.Ai??Ai??Ai?? I wish that the producers would have worked harder to give that important message a delivery it is worthy of.Ai?? In art, it is not enough to merely communicate a message.Ai?? It should be communicated well.Ai?? This was simply a missed opportunity

Great review of what I he'd would be a great movie. Such a disappointment to hear how bad it was. I will certainly watch it on DVD but will save my $10 (more like $70 if I include the whole family) from watching it in theaters.

@AdamGray If it's a bad movie, why would you watch it on DVD?

@chrstrock @AdamGray Because I would rather watch a movie with a bad review for a few bucks rental than spend $70.  Even for bad reviews I tend to watch the movies on DVD/NETFLIX to see how close the review itself was.

I actually enjoyed the movie other than the dance scene and some of the slow-mo in other parts was a little more drawn out than I would have liked. I think if they had kept it to 15 seconds or less, the dance scene would be acceptable, but I appear not to be quite the student of film that you are. There was also some creative interpretive license concerning the gift boxes around the tree symbolizing the new Jerusalem, but it was a beautiful idea. I thought the Chocolate Knox was hilarious, myself. He needs to do more of this kind of thing. And the subtle nods to Reformed types (God Rest Ye Merry by Doug Wilson in the foreground of the living room scenes with Kirk, Chocolate Knox is heard to yell "Theonomy" at one point from off camera, and the Postmill Editing team credit shows onscreen at least twice) were funny to me given the Liberty University connection. All in all, I'm glad I went and I know I'm going to enjoy Christmas more this year because of the perspective gained. I was starting to buy some of the fundie fuddy-duddy business.

@NickSchoeneberger I haven't seen this yet, but based on Nick's comments, what's with Kirk and his over-use of slow motion? We watched Mercy Rule and one of the complaints my kids had was regarding the gratuitous use of slow motion throughout the film. That being said, I do want to check this film out at some point.  Keep hoping for better. :-)

I had a feeling from the trailer alone that this film would probably not work.