Selma, which is directed by Ava DuVernay and stars David Oyelowo as Martin Luther King, Jr., and Carmen Ejogo as Coretta Scott King is a movie that grabs you by the scruff of the neck and carries you through to the end without any awareness of the passing of time. Oyelowo’s performance is inspired’in fact, let’s just get this out of the way here and now: every single actor in this film turned in an inspired performance. The musical score was spot-on and the wardrobe and sets were spot-on. When this film depicts events in the Deep South in 1965 you feel like you are watching high definition versions of those events from the perspective of someone who was there.

That is what is disturbing to a white Southern Baptist pastor who was born in 1971. This movie presents the truth of the ugliness of racism. It is an expose of sinful human nature up close and personal. And even though the events depicted happened fifty years ago, the emotions are still raw. If you don’t believe that, go watch this film in Alabama.

Some reviewers criticized Angelina Jolie for her depiction of the sadistic violence in Unbroken. I don’t think you will hear that criticism this time around because racism is the cause celebre right now amongst the Hollywood elite. Especially considering the recent events in Ferguson, MO and New York City. At the funeral of a young black man who was murdered by police during a night march in Selma, AL, King is depicted asking, Who murdered this young man? It wasn’t just the police officer. It was everyone at that time who looked the other way when our neighbors’our black neighbors’were treated as subhuman. This reality ought to make us all weep, black or white.

We are guilty every time we say, Wasn’t Martin Luther King Jr. a communist? and then write him off as a by-word.

We are guilty every time we say, Wasn’t Martin Luther King Jr. an adulterer? and then write him off as a pervert.

We are guilty every time we say, Wasn’t Martin Luther King Jr. a liberal? and then write him off as a historical hiccup.

If you avoid this movie because of any one of these three commonly repeated white evangelical mantras you need to take a hard look at yourself. Why? Because this movie is not really about Martin Luther King Jr. Granted, you might be surprised to learn that a careful viewing of this film would reveal that the film makers were honest about his liberalism and his adultery. The communist thing can be explained by J. Edgar Hoover’s role in history and he figures prominently in this movie as well. Total depravity explains Martin Luther King, Jr. just as it explains you and I.

So if this movie is not about Martin Luther King, Jr., then who is it about? It’s about us.

Here is the uncomfortable truth to end uncomfortable truths. When Martin Luther King, Jr. called for men of faith to come to Selma to march with him it wasn’t the conservative evangelicals who showed up. Billy Graham wasn’t there; you know, the guy who doesn’t have any problems joining hands across denominational lines? It was the mainline Protestants’the liberals. It was the Eastern Orthodox. Where were the conservative evangelicals? It makes me cringe to type it, but I suspect they were on the other side of the bridge. They were standing with the Alabama State Troopers. If they weren’t standing with them in body, perhaps they were in spirit. Maybe they were watching it on television with 70 million other viewers cheering on the police. Maybe they justified it because King was a liberal communist adulterer. Perhaps they justified it even as they prepared their Sunday School lesson, their sermon, their tithe check. Love thy neighbor doesn’t come with an exemption if he happens to be liberal, communist or an adulterer. Or black.

We all, white and black, need to take a hard look at ourselves. Self-examination is always a good thing. I’m white so I have to ask these kinds of questions:

Do I understand what it is to descend from slaves and carry the last name of the Southern white slave owner who considered my ancestors as property? As a white person, have you ever met an African American with your own rather uncommon last name? I have. Awkward doesn’t begin to describe it. It brings it home a little bit.

Do I understand what it is like to watch a movie like this as an African American and think of my parents and grandparents as having endured these injustices? What if it were my predecessor who was shot by a police officer during a peaceful demonstration? What if it were my daughter blown to bits in church?

Do I understand what it is like to be denied a mortgage because the house I wanted to buy was inside a line on a map in a banker’s office that included a neighborhood of people that look like me?

Do I understand what it is like to be pulled over by police because of my skin color?

Nope. I don’t understand any of it. I haven’t lived that. Maybe, just maybe, when we start to admit that simple fact we might be able to understand the term white privilege.

White American evangelicals suffer from a deplorable lack of curiosity about the lives of their African American neighbors. We don’t want to walk a mile in their moccasins’heck, we probably don’t even want to see their moccasins. We want to ignore it while we sing spirituals in our white churches and imagine that that makes everything good. Walk a mile we must. We should go with them two. They are our brothers and sisters in the human race. Many are brothers and sisters in Christ. We have to stop pretending that our history does not matter. THAT is the current evangelical way of dealing with this issue: deny, ignore and pretend.

A couple of days ago I was alerted to a Facebook post which made the claim that Selma is perhaps the best gospel-centered movie that’s come out in the past year, all of the faith-based films of 2014 notwithstanding. While I am not willing to go that far, I will say that this movie is remarkable, not because of what the movie makers consciously wrote in to the movie, but because of their faithfulness to the Christian culture which predominated in the Southern King-led civil rights movement. In that faithfulness, we have a movie which is full of Christian references which served as the inspiration for the Martin Luther King, Jr. brand of non-violent activism. In the process, viewers of Selma are treated to a triumphant view of Jesus Christ in these references. This is the Jesus who sets people free by truth. This is the Jesus whose coming makes all things right, including racial prejudice and injustice.

There is the truth. The gospel can set us free from ourselves. When we repent of our sinfulness’in this case our hatred of our brothers which IS murder (1 Jn. 3:15) and trust in Christ’s atoning work on the Cross, we can be made right with God (2 Cor. 5:21). But we can also be made right with each other. There is no Jew or Gentile, slave or free, in Christ (Gal. 3:26-29).

Every evangelical I know would say Amen to this. But this is more than theological truth. It is truth which should translate into some difference as to how we secretly think, feel and do when it comes to our African American neighbors. Selma will help us walk a mile in their shoes. In the process, we might learn something about our own shoes. 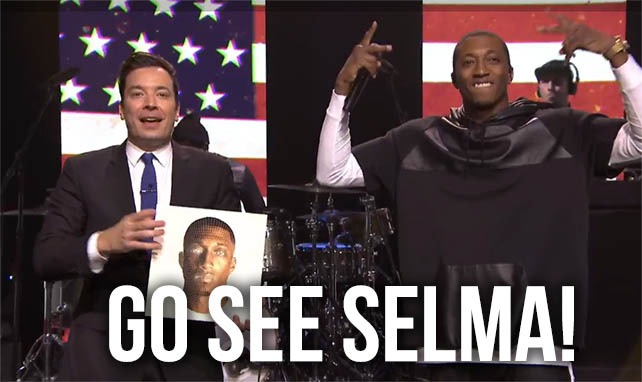 Previous postWhy Unbroken is the best Christian film of 2014