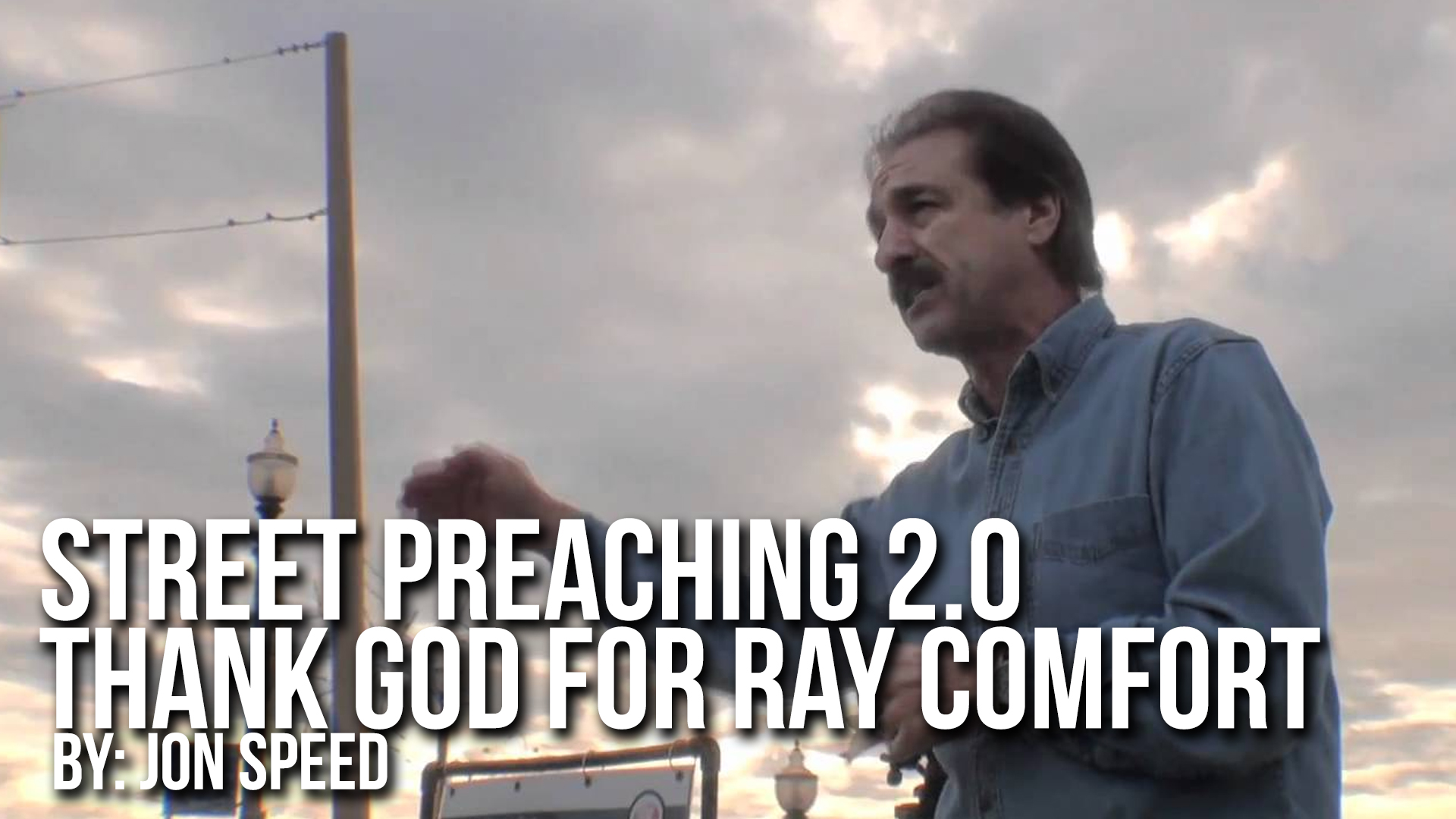 If anyone ever writes the history of open-air preaching in the 21st century, they will be writing about the influence of Ray Comfort and his television show, The Way of the Master. Many of the leaders in the present day open-air preaching sub-culture learned about open-air by watching that television program and by attending either a Great News Network (GNN) Evangelism Boot Camp or an Ambassador’s Academy. These were short training camps intended to introduce evangelicals to the process of presenting the Law of God before presenting grace when they did street evangelism. In both trainings, open-air preaching was heavily emphasized.

In the years 2004-2006 more than 100 GNN evangelism teams popped up in nine nations. This early activity laid the foundation for what would come afterward. In 2008-2010 the Ambassadors Academy had thousands of graduates and a network that Ray could use to distribute more than 100,000 copies of his edition of Charles Darwin’s Origin of the Species to the leading college campuses across the nation. As recently as 2011 the same network could be used to distribute his pro-life movie 180 on college campuses. At the Living Waters Deeper Conferences The 500 outreaches actually succeeded at getting 600 believers out on the streets in Atlanta for a night of evangelism and other conferences had outreaches ranging from 100-250.

Those early days were an exciting time as it seemed that the evangelical world was being reintroduced to an age-old but neglected practice of preaching the gospel on the streets. We felt like we were on the cutting edge of a coming revival. Few people did full time street evangelism and most focused on building evangelism teams in their immediate cities, especially in those earlier GNN years. The Way of the Master won awards for quality Christian television programming, mainly because of its unheard of ratings due to the presence of co-host Kirk Cameron. Kirk’s presence also drove attendance at the on-site trainings that were held in Southern California; I remember one where we had something like 125 people in attendance. All of this excitement and growth could not last because it was not rooted in the atmosphere of accountability that can only come in the local church.

As evangelicals attended these events (and others like them) and the movement grew, the participants who invested their time and money into attending these events grew spiritually. We began asking questions about some of the methodology that we were introduced to at the training events. Questions like, Is it right to hand out gospel tracts printed on the back of fake million dollar bills? Isn’t giving away money for answers to trivia questions to draw a crowd for a gospel presentation pragmatism? Is it even preaching’? The Way of the Master Radio program, hosted by Todd Friel and accompanied by Ray and Kirk, began to bring up theology by way of quotes from the Puritans and Charles Spurgeon. Then we got interested in the history of open-air preaching and the methodologies of men like George Whitefield.

In 2006, Paul Washer’s Shocking Youth Message came out and we were all introduced to another way of presenting the message of false conversion. Sermon jams’short clips of various sermons mashed up into a five or eight minute Youtube video or mp3 audio’became popular in the community. In eight minutes you could hear Leonard Ravenhill, Paul Washer, John MacArthur, John Piper, and other audio clips all thrown together in a blender. The clips were all out of context but they had one unifying theme’they were the most intense moments of a sermon usually calling false converts to repent.

Spinoff ministries developed with leaders who encouraged us to look into methodology and theology and other evangelism conferences and outreaches developed that were not associated with Ray’s ministry. We began pointing people back to historic and sound practice when it came to open-air. It was a reformation of what we had learned under Ray. We wrote our own tracts, wrote our own books, and made our own videos.

Whereas we used to sound like clones of Ray Comfort by repeating his open-air messages verbatim and quoting his jokes, we all began sounding like Paul Washer in the open-air. Just as I used to hear people imitate Ray’s New Zealand accent, I began to hear the cadence and inflection of Paul Washer or Keith Daniel in conferences and on the streets. At the new conferences that popped up other dynamic speakers began to be popular and within the culture, they have also been imitated.

The imitation of our favorite preachers isn’t preaching, by the way. Ask your pastor if he gets his material from Youtube. Preaching is (or ought to be) the result of hours of prayerful preparation in the study before God. If you can train a parrot to repeat a sermon, I don’t think you would call it preaching.

In the process of all of this, the tone of open-air preaching changed. Ray Comfort is one of the naturally funniest and perhaps the friendliest person I have ever met. He genuinely loves people. He appears to thrive on interacting with them. While that can be imitated by parroting, it cannot come off as genuine unless you really love people. The tone on the streets changed from that to what I call, Men behaving badly (with apologies to the old TV show of that name).

Our conferences and large scale outreaches became places where we were encouraged to preach and were fed the Word of God, but unfortunately, they were also places where a bunch of (mostly) middle aged white guys got together to encourage bad behavior on the streets when we did outreaches afterwards. Attempting to reach people with the gospel has’in some cases and certainly not all’turned into yelling the gospel at any gathering of people in public without much concern as to whether or not we are communicating. We have emphasized proclamation to the neglect of communication. Communication is two-sided, not one-sided. Real communication makes sure that the recipient understands what you say, even if they disagree. Say what you want but Ray’s approach to open-air was excellent at this.

I have been away from the regular proclamation of the gospel on the streets for about a year. I’ve written a bit on some of the abuses before and have preached on them at the conferences. In the process I saw that a lot of what I criticized was behavior that I encouraged over ten years of open-air preaching and training.

I’m thankful for my broader understanding of theology and methodology, which I owe to the development of the movement of street preaching. But I think I need a reboot. I need to start over. Rather than imitate some other leader, I’m going to start with Jesus’the Master. I’m going to keep all of the theology and methodology I’ve learned, but I’m also going to emphasize love for God first and include love for people. Rather than focus on preaching, I am going to focus on speaking to people one-to-one (at least to start). I might bust out the old pink and blue curved illusions (I guess they are red and blue now but I have some left overs). Ai??Ai??I won’t parrot anyone but just take all I’ve learned and be myself. However, I am convinced that it would be better to sound like Ray Comfort rather than a sermon jam rant on a continuously repeating loop. Perhaps we need to go back to our roots and remember what we learned from the guy who introduced us to open-air evangelism’Christians can communicate the gospel in a way that is engaging and winsome. By God’s grace I hope I can. I hope others will too, but all I can suggest is that we take a look back and thank God for how He has used Ray Comfort. And remember something of his love for the Lord and for people.

If I speak in the tongues of men and of angels, but have not love, I am a noisy gong or a clanging cymbal. (1 Corinthians 13:1, ESV)

You hit the nail on the head Jon! Very well communicated ;-) Thank you for that!

One slight correction, the GNN bootcamps went through 2007.  I know because I was in a November GNN bootcamp in DC.  Good work on this article.  I also started with regurgitating Ray Comfort's message but slowly changed to my own style.  We all are given specific mannerisms and a personality that we need to use to communicate.  the Gospel message is an extremely personal one, don't forget to add yourself, your own testimony, when needed.

The core of what Ray introduced to so many, that the Law often (or even mostly) should be given before Grace, has proven powerful and biblical.

Ditto to what Marv said....great article.