Can Gospel Spam do politics? Oh, why not’

The Republican Party has apparently lost their minds. Donald Trump appears to be walking away with the front runner status. Donald Trump. The Donald. I just wrote this paragraph and I’m not writing script for Saturday Night Live.

Here are some facts:

Fact #1: Donald Trump, the successful businessman, has been bankrupted four times. Four. And he wants to rescue bankrupt America. This is the guy who could not keep a world class bicycle race named after himself (the Tour de Trump in the 1980’s) financially solvent. Insert Trumpish raised eyebrows and pursed lips here. Like this…. 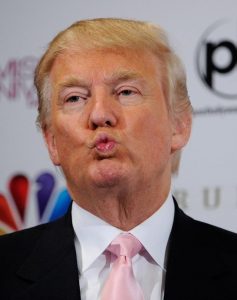 Fact #2: Donald Trump has been married three times. Three. And evangelicals think he will be a better moral alternative to what we’ve had the last eight years. Remember the homosexual marriage thing? Just exactly how do you expect to claim the moral high ground on the issue of traditional marriage? Unless traditional marriage is now polygamous. Obama may be a lot of things, but he’s been married to one woman and you can find all of his dependents at one address.

Fact #3: Donald Trump has NEVER served in any elected position. Remember when Obama ran the first time and the pundits were screaming about his lack of experience as a SENATOR? Since then they have treated us to a Vice Presidential candidate who was the governor of Alaska (yes it’s an elected position and yes it’s a big deal, but it is not exactly Beltway experience). And now we may be about to be treated to a candidate who has never been elected class clown. Although it appears that it’s not too late.

Fact #4: His stance on abortion. He’s pro-life, donchaknow? Unless he’s talking about his pro-choice sister who he thinks would make an excellent Supreme Court justice (nepotism schmepotism). Planned Parenthood (you might have heard of them), does do some important things. Ya know, like hack babies to pieces and then sell them to the highest bidder. Yeah. He’s pro-life. Which often means the sum total of nothing.

Fact #5: The Donald’s favorite book is the Bible! Oooooh. And he goes to church. Ahhhhh. What’s his favorite verse? That’s personal. Is he an Old Testament or New Testament guy? He likes them both. It just sounds too much like a candidate who: 1) is lying through his teeth and 2) had no idea that the question was going to be asked. Presidential candidates time immemorial have pandered to voters using the Christian faith. The difference is that most presidential candidates are a heck of a lot better at it than Trump. Does this guy have ANY campaign advisers or do they all have the same amount of experience in politics that Trump has?

Fact #6: If Donald Trump was running as a Democrat (and with Hillary’s fall from grace amongst that tribe don’t think that they wouldn’t take him in a New York minute), facts #1-5 would be the subject of endless political commercials. If Trump wins the Republican nomination, I may have just outlined their campaign strategy. I’ll send them a bill.

And this is the guy leading in the polls? What? Hello? What madness has descended on Republicans? He should be ranking down there with Rick Perry and George Pataki.

If this isn’t proof that the Republican Party is half past hopeless, I don’t know what is. This was the election where I had some hopes of voting for a Republican candidate. Rand Paul was intriguing. Mike Huckabee. Ted Cruz.

Those who like Trump tell me that he’s saying what everyone wishes they could say if they had the microphone. Which amounts to little more than good old fashioned angst. Angst is never really the foundation for a well-run Republic. Here’s why it doesn’t work historically’populist mobs whose only prerequisite is rage without any consideration of substance are great fodder for tyrannies which are driven by slogans and not content. All of that to say that this nation is ripe for a tyranny. Unlike what you were taught in government schools, tyrants are usually elected.

But what do I know? Have faith in the system, they say. It’s early on in the process, they say.

For the sake of argument let’s assume that the early leaders don’t usually make it to the finish line. I suspect that that will happen if this is just a lark and Trump can’t handle the heat from the fire of his own devising. After the Tour de Trump is over who will be left standing? The one with the most money. After Trump that figures to be Jeb Bush. Perhaps that has been the Republican plan all along. After McCain and Romney, this is starting to look like an endless series of Rocky sequels. Except Rocky used to win.