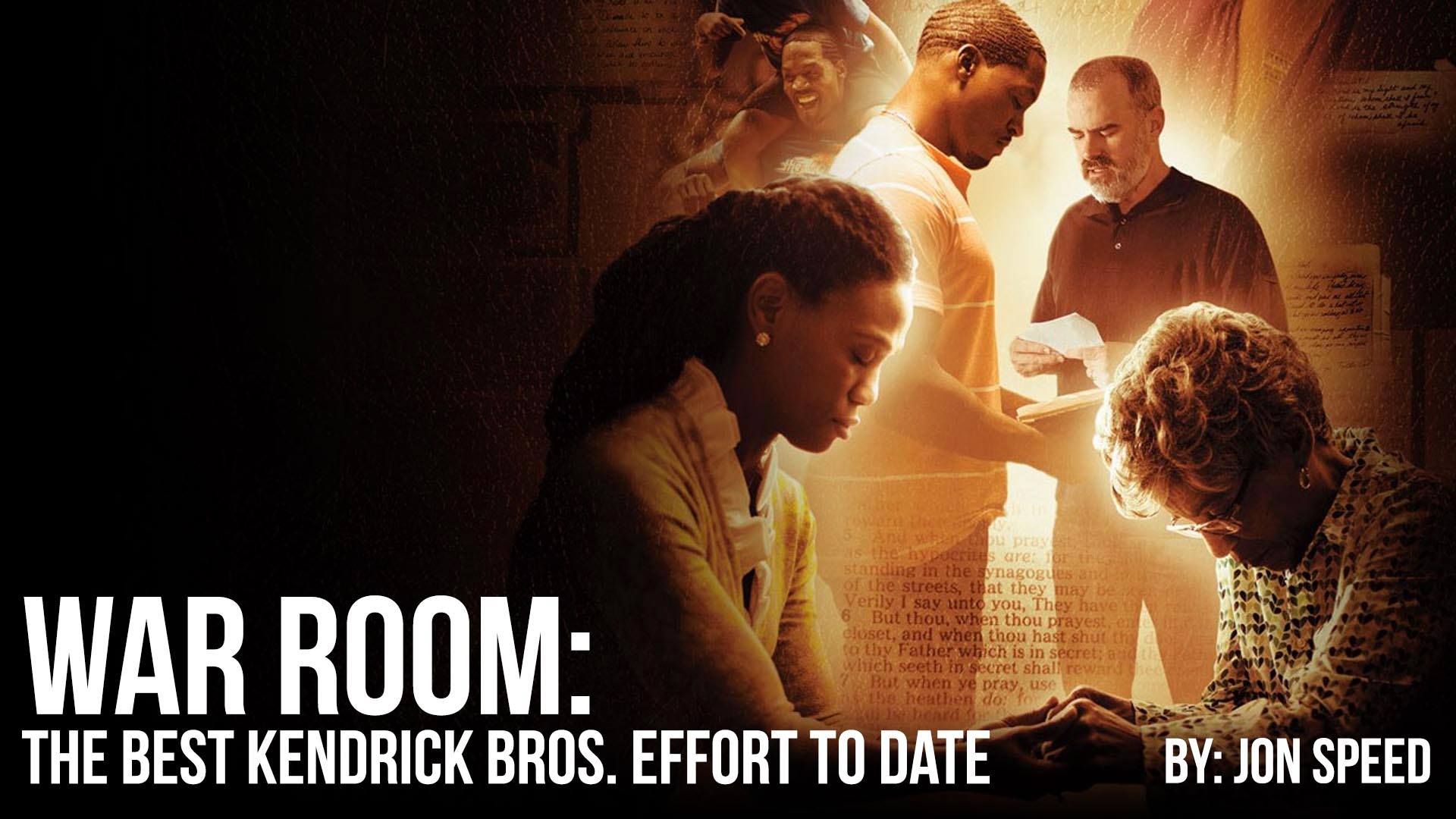 It’s not often that I can say that Christian filmmakers have actually done a service to the Church rather than a disservice.Ai?? I’m pleased to say that the Kendrick Brothers have done so.Ai?? In their newest movie, War Room, they have shown the Christian film industry what Christian film CAN do’glorify God with good writing, better acting, and art that actually imitates life.

It’s not a perfect film by any stretch of the imagination.Ai?? By the end of the film you know that you’re watching a Kendrick Brothers production.Ai?? And there was one massive theological slip-up that ought to be corrected rather than encouraged.Ai?? Those flaws aside, War Room is a beautiful film that will inspire, encourage and edify Christians in one of those sticky areas that Christians are weak in’prayer.Ai?? And it doesn’t come off like a glorified sermon or a poorly written gospel tract.Ai?? This film works and the reason that it works is because of the two most important ingredients in any Christian film:Ai?? writing and acting.

I took my wife on a date to see this film.Ai?? She did not want to go.Ai?? My daughters sometimes go with me when I review films and they have regaled her with stories of my reactions during Christian films.Ai?? In some Christian films I have a tendency to offer commentary when the content is really terrible (which is most of the time).Ai?? During God’s Not Dead I had the guy next to me laughing out loud while the atheist was dying on the sidewalk.Ai?? We watched Left Behind as a screener at home and we were all roaring (a MUCH better place for running color commentary).Ai?? Kim was in the bedroom reading a book.Ai?? Did I mention that she doesn’t like watching films with me that I’m going to review?

However, in this case P.F. Chang’s was involved beforehand as was one of our favorite homemade ice cream stand, Arctic Island, and so she was willing to give it a go.Ai?? I promised to be on my best behavior.Ai?? Nevertheless I did something I’ve never done during the previews: when the trailer for 90 Minutes in Heaven played I booed out loud (BOL?).Ai?? She didn’t mind that one so much.Ai?? I think we had a healing moment there.Ai?? We held hands, smiled warmly at one another, and wept buckets of tears while soft, emotionally manipulative music played in the background.Ai?? Wait a minute.Ai?? No.Ai?? Sorry, I got confused.Ai?? This is a review of a Christian film, not the Christian film itself.Ai?? Back to the review.

The story is this: a married couple with a daughter have a bad marriage.Ai?? Really, really bad.Ai?? It’s the typical upper class American tragedy.Ai?? Both parents are successful and have built their sand castle in suburbia.Ai?? Mom is a realtor and dad is a pharmaceutical sales rep.Ai?? Dad works too much and in the process has grown bitter towards his wife.Ai?? The threat of an affair looms large.Ai?? This marriage isn’t only on the rocks, it is on the verge of resembling the Titanic without the DiCaprio love story.Ai?? There’s no love here, only impatient tolerance of the significant other whose only significance is their ability to earn a paycheck.Ai?? Since their daughter lives with a couple of selfish idiots she is neglected.

The truly sad thing is that there’s nothing new here.Ai?? I’ve just given you the formula for a lot of literature in the modern age, especially if you tell it from the perspective of the child who grows up with a lot of anger and spends the rest of their lives figuring out how to get over it.Ai?? Getting over it either involves becoming incredibly successful or incredibly psychotic. It seems like at some point in this nation we would understand the utter bankruptcy of sacrificing our families for the sake on money, but apparently we all have a price tag.

Since this is a Christian film and there must be a happy ending there has to be a rescue mission.Ai?? So who is going to be the hero?Ai?? Are we going to get a Kirk Cameron Fireproof cameo?Ai??Ai?? Is there a theistic moralistic therapeutic answer for this family?Ai?? Some vague reference to God, an obligatory nod to the Gospel of Jesus Christ and a list of good ideas for people who are selfish to become selfless by virtue of their desire to keep their marriage?

Not in this film.Ai?? No, here the hero isn’t either one of the main characters.Ai?? The hero here is God and the gospel.

Sadly, that’s surprising in a Christian film. Just like it’s surprising that we don’t hear sermons about God in church very much any more. God is the hero because rather than approaching the marriage as a fixer upper, the wife approaches God in prayer with the help of a wise, elderly saint. God saves the marriage. She’s also taught how to show grace to her husband because she has received grace in the gospel.Ai?? This is not the gospel you are used to hearing in a Christian film.Ai?? It’s not tacked on as an overt evangelistic tool for the sake of unbelievers.Ai?? It flows into the story as naturally as the gospel should flow into our lives on a daily basis.Ai?? This is the gospel being preached to professing believers.

What sets this movie apart is the fact that the plot development is not forced at all and that the writing is, for the most part, very good.Ai?? It’s believable.Ai?? In fact, to be honest, the script for the husband was a little too close for comfort and brought back some memories.

By itself the writing would not be enough to make this a great film.Ai?? It’s the acting that really delivers.Ai?? The Kendrick Brothers must have known the talent that they had recruited because they gambled on tight shots on the faces of the actors and to pull that off you had better have someone who is fully invested in their roles.Ai?? They not only need to be believable, they need to believe it themselves.

I’ve never been as impressed with acting in a Christian film as I was with this one.Ai?? Every detail was spot on in the acting, right down to the facial expressions, vocal inflections, passion’you name it.Ai?? I doubt there are many in Christian film that could turn in a performance as believable as T.C. Stallings’ as the selfish husband.Ai?? Priscilla Shirer as the praying wife was very, very good as well.

Unfortunately the writing doesn’t keep up with the acting and it really is a shame because the writing is a victim of the template that the Kendrick Brothers seem to place on themselves.Ai?? That template involves tying up all of the loose ends in the plot with a seemingly endless series of gratuitous tear jerkers at the end.Ai?? I didn’t time it although I should have because I was expecting it.Ai?? After all, I saw Fireproof.Ai?? My guess is that there was a series of half a dozen tear jerkers over the last fifteen minutes that nearly hijacked the film.

Writers have to play fair.Ai?? It’s a cheap gimmick to pile on the tear jerkers like football players on a fumble in order to manipulate the emotions of the viewer.Ai?? In evangelicalism we’re at a place where tears are synonymous with repentance.Ai?? Viewers could walk out of this film emotionally drained thinking that they’ve had a religious experience when all they were was manipulated.Ai?? The worst part about it is that the film would have been nearly perfect.Ai?? It’s like painting the Mona Lisa and then grabbing a Crayola and signing it in block letters.

Yet it would only be nearly perfect because of the aforementioned theological faux pas.Ai?? During a prayer session, our heroine begins repeating James 4:7 and decides to resist the devil literally by exorcising satan himself out of her house.Ai?? She paces through the living room while she goes off on a rant commanding satan to leave her family alone and serving notice that the home is under new management.Ai?? Most evangelicals won’t see a problem with this because of the influence the charismatic movement has had on evangelicalism.Ai?? However, we are never commanded in Scripture to exorcise our homes if we have bad marriages.Ai?? Instead, we are to do what the rest of this film models: repent, pray, submit, love, show grace and be gospel centered.Ai?? There is also the issue that satan himself is not omnipresent.Ai?? Christianity is not Star Wars where two separate but equally strong supernatural forces are battling each other for supremacy in the universe.Ai?? As Martin Luther said, the devil is God’s devil.Ai?? His head has been crushed.Ai?? In 99% of broken marriages the problem isn’t the devil.Ai?? The problem is our own sinfulness that arises from our own sinful nature.Ai?? We don’t pray to beat the devil.Ai?? We pray to bring our thinking in line with God’s as we commune with Him.Ai?? Lastly, our heroine (and anyone else who is attracted to this kind of thing) would have done well to consider Jude 8-9.

At this point someone will ask, What about Beth Moore?Ai?? To which I respond, What about her?Ai?? Her role is a mere bit part and adds little to nothing to the film itself.Ai?? What it did do was appeal to the demographic:Ai??Ai?? how do you get white middle class evangelical females to attend this film?Ai?? Add a dash of Beth Moore.Ai?? Just like the rest of her ministry as of late, she added nothing of substance.Ai?? On the other hand I’m quite sure she helped out substantially at the box office.

In spite of the flaws, and all movies have them, you need to go see this film. If you do not you will miss an opportunity to support a genuinely gospel-centered work that has pretty good writing and the best acting you’ve seen in a Christian film.Ai?? In the process you will be reminded that life is not about you, it is about God and your role in marriage and life is as a recipient of grace.Ai?? Take the flaws as part of what you have to put up with as Christian film matures and thank God that it’s getting better.