What Mike Tyson Can Teach the American Evangelical Church 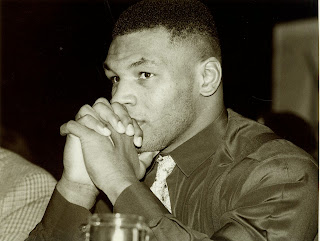 Mike Tyson: former heavyweight champion of the world. He still holds the record for the fastest Junior Olympics knockout (8 seconds). ESPN ranked Tyson as the most powerful puncher of all time. “Iron Mike” is the former husband to a once-famous starlet. He earned over $300-million dollars during his career and was bankrupt before he retired from boxing. Tyson, a convicted rapist, spent three years in prison, where he converted to the false, blasphemous, and demonic religion known as Islam. Tyson, a self-admitted alcoholic who lied publicly about his sobriety, has been married three times and has fathered eight children by “several women.”

Even by the world’s standards, Mike Tyson is a bad man. According to God’s standards, Mike Tyson is a man who has violated His Law. He is a blasphemer, an idolater, a fornicator, an adulterer, and a murderer-at-heart. According to God’s standard, unless Mike Tyson repents and receives Jesus Christ as His Lord and Savior, he will perish in his sin and spend eternity in Hell. He will face the same judgment people much nicer than him will face, if they do not repent and believe the gospel.

To date, Mike Tyson’s life is an example of how not to live. He is not noble. He is not chivalrous. He is not someone to be emulated. He is an anti-hero. But for the grace, mercy, and forgiveness of God given to me by His sovereign will, through the death and resurrection of God the Son, Jesus Christ the Lord–a love and grace manifested when He cause me to be born-again and extended to me the gifts of repentance and faith, I would be Mike Tyson…minus the physical talent and power. I, too, would be a child of wrath, as Mike Tyson is at this moment. I, too, would be destined for Hell, as Mike Tyson is at this moment. 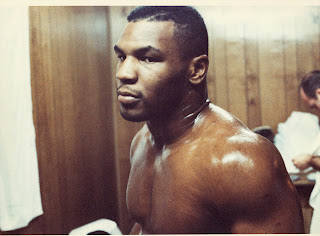 All of this introductory information was necessary. Some readers might not make it past the title of this article. There might be some who are so arrogant, so haughty, so misled that they have rendered themselves unteachable. After all, what could a wretch like Mike Tyson possibly teach American Evangelicalism? Some readers might try to insist I am touting Mike Tyson, trying to find something redemptive about the man, when I’m not. How could I possibly find anything about Mike Tyson worthy of redemption when the Bible makes it abundantly clear there is nothing worthy of redemption in me or any other human being.

But of course, this is not to say Mike Tyson cannot be redeemed. If the Lord extends His sovereign grace and mercy to Tyson and causes him to be born-again, then Tyson will be redeemed–not on the basis of anything Tyson did to bring about his redemption, but entirely on the basis of God’s mercy (Titus 3:4-7).

With all that said, Mike Tyson once said something that was so profound in its practicality, so simple in its wisdom, it’s worth remembering and it’s worth repeating. Not only was it a remarkably relevant proverb for the world Tyson knew best–professional boxing–it is also a proverb, if understood in the unintended context of American Evangelicalism, that could literally one-day save the lives of American Christians.

“Everybody has a plan until they get hit. Then, like a rat, they stop in fear and freeze.”

The context of the above quoted statement: Tyson was being asked about an upcoming opponent’s tactics and strategy when he made the above remark.

Tyson went on in the interview to interpret his statement. (Note: the original, intended meaning of the author is the only correct interpretation. Therefore, Christian, as a student of the Bible, your responsibility is to come as close as you can, through diligent study, to rightly understanding the Author’s original intended meaning.)

“If you’re good and your plan is working, somewhere during the duration of that, the outcome of that event you’re involved in, you’re going to get the wrath, the bad end of the stick. Let’s see how you deal with it. Normally people don’t deal with it that well.”

“Everyone has a plan, until they get hit.”

Tyson’s uninspired proverb applies almost prophetically to the American Evangelical Church. She has sincere and grandiose plans. She has plans for growing the church (some of them built on the traditions of men and not on the Word of God, and some of them biblical), plans for discipling “believers” (some plans not taking into account that you can only force a goat to act like a sheep for so long; some plans biblical), and plans for reaching the lost (some plans include presenting Jesus as the best deal on a used car lot; some plans biblical).

Quite frankly, I believe American Evangelicalism, generally speaking, is afraid to get hit, unwilling to take a punch, wanting to collect the purse without getting bruised, cut, or worse. Of course, while saying this I am well-aware that there are churches, fine churches, most of which are utterly unknown to the masses and ranked among the underdogs, that will get into the ring and fight. They will take on all comers, willing to stand toe-to-toe in the center of the ring and take whatever the opponent can dish out. And, with the help of the Holy Spirit, will not only take the punches that are coming, but will also endure to the bell at the end of the last round.

“Have nothing to do with irreverent, silly myths. Rather train yourself for godliness; for while bodily training is of some value, godliness is of value in every way, as it holds promise for the present life and also for the life to come. The saying is trustworthy and deserving of full acceptance” (1 Timothy 4:7-9).

Previous postHeaven is For Real: How Todd Burpo and Hollywood Fleeced Christianity.