Someone Save Chris Pine from Wrinkle! 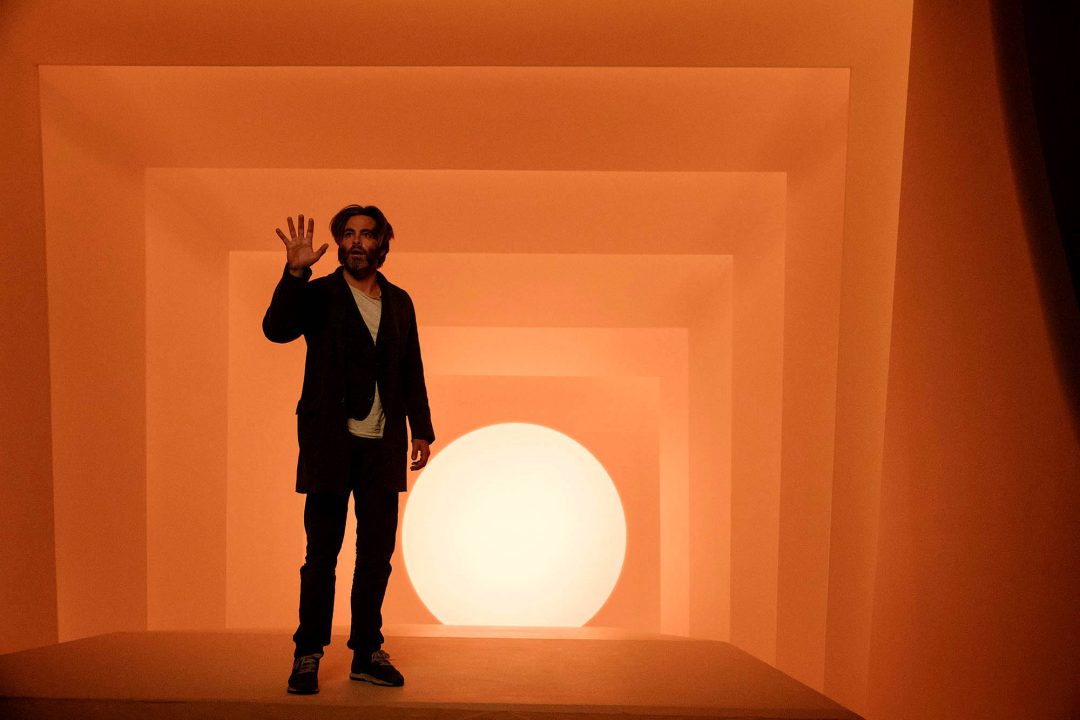 I first read a Scholastic edition of A Wrinkle in Time around 1980 when I was probably about nine or ten years old. It may have been the first science fiction title I read. I remember reading Wrinkle into the wee hours, imagining an evil-driven dystopian society on Camazotz where Dr. Murry was imprisoned for years because of an ill advised experiment in time and space travel.

The book gripped me. Its dark themes were interspersed with a familiar hope–the comforting power of the Bible and a somewhat familiar conception of God.

In preparation for this review I picked up another copy of Wrinkle, the film tie-in version on sale now at Barnes & Noble or wherever good books are sold. We rarely get it in our used book store because it’s a loved book; it won the Newbery Award for childrens fiction. I read it in a day; a few hours of great entertainment for seven bucks.

And then I went to see the film yesterday. This is an epic in bad film making.

How bad was it?

1. Oprah Winfrey and Reese Witherspoon ought to give whatever they were paid back. They were paid to act. They did not. Their performances were uninspired, boring, pathetic, etc. Both of these women are phenomenal actresses when they want to be. In NFL terms, they were taking a few plays off. More like the entire game. This is Randy Moss and Terrell Owens treating the Super Bowl like it’s a Monday walk-through practice without pads or helmets.

2. When the director decides to do her own introduction to a film, you have to wonder. I don’t remember Peter Jackson inviting people into his version of LOTR, or Andrew Adamson giving his thoughts before the Lion the Witch and the Wardrobe. Arguably both of these books into film were far better books to begin with. Good writing doesn’t need an explanation. Neither does good directing.

But taking a Newbery Honor book and turning it into trash? Yeah. You have some splainin’ to do, so we were treated to a minute or so of femsplainin’. None of which explained a single thing except that DuVernay lives in a fantasy world of her own concoction if she thinks her version of Wrinkle is anything but another lame attempt at turning this classic into film.

Perhaps it was her way of signaling to the press that serious critique is off limits because she is she (if I may assume her gender) and an African American she at that. I’m no good at picking up on signals and am not owned by Hollywood, so I’ll just take the liberty of pointing out that it was a classic misdirection. If you want to see a truly great film with an African American director and cast, go see The Black Panther while you still can.

By the way, listen to the NPR review of the film if you want a real treat. Liberals trying to graciously snub Oprah with compliments is always a treat. “She’s just too ‘Oprah.’ She is just so great we are used to her greatness and are too used to seeing how great she is.” What the heck? NO. This film is lousy and Oprah helped make it so.

3. When you market a book into film to an audience that is absolutely hooked on the book, you ought to do more than just give a tip of the hat to the book. This thing has sold 14 million copies! You should probably stick to the plot line a bit. This is a stripped down version of the book that replaces any reference to Christianity (albeit a universalist, moralistic version of Christianity) with old, washed-up secular humanism and New Age paganism. That’s not surprising in this time we live in, but given Oprah’s involvement, it’s even less surprising.

Don’t see this film. Don’t watch the trailer. Forget you ever heard about it. If you saw it, go to your local auto mechanic and ask him to use the emergency eye wash station. You can bet that Oprah and Reese will rue the day they got the call from casting.

However, there is some good news here.

1. You cannot have better proof that Oprah’s worldview is bankrupt than her performance in this film. The message of Oprah (and this rubbish) is typical Disney lingo. “Be true to yourself.” “Look within.” “You are god and control your own destiny.”

If any of this was true, why is it that Oprah could not look within, be true to what she found there and astound us with her godlike acting ability? She could have controlled her own destiny and got an Oscar for her role. Was it because she was taking the game off since she is already an ascended master?

The truth is that it’s all nonsense. The guru of New Age self help couldn’t even save herself from a snooze-worthy performance. Pathetic.

2. You cannot have better proof that L’engle’s version of Christianity is bankrupt than this film.

It is truly a source of wonderment that Madeline L’engle is considered a sort of Christian writer. Some bloggers complained before the release that the film was going to be stripped of all of its Christian references and thereby become irrelevant. Other bloggers have complained of that dilution since the release.

It’s true enough that there are Scripture quotations within the book. Selections from the Psalms, the Gospels, and the Epistles of Paul are scattered throughout. In truth, they are the only source of comfort for Meg and Charles Wallace as they scour the universe for their father. Some of the citations are so pointed that even as a young reader, I thought, “Wow, she is a Christian.”

And then you come to a point in the book where the three Misses are explaining that there have been other fighters (warriors in the film) who fight against evil.

“Oh, you must know them, dear,” Mrs. Whatsit said. Mrs. Who’s spectacles shown out at them triumphantly, “And the light shineth in the darkness; and the darkness comprehended it not.”

[And now George Beverly Shea is going to lead us in “Just as I Am” as you make your way to the front of the stadium. Um, no. Not quite.]

“Of course!” Mrs. Whatsit said. “Go on, Charles, love. There were others. All your great artists. They’ve been lights for us to see by.”

“And Shakespeare,” Charles Wallace called out, “And Bach! And Pasteur and Madame Curie and Einstein!”

L’Engle was a brilliant and important writer. Every educated child should read her. She should NOT be banned. But one thing they should understand before they do read it is that she is not Christian. She wrote in a Christian culture that was heavily influenced by the Bible. That is not an evidence of her Christianity. That is an evidence of the common grace of God on our culture at that time.

Christianity understands that John 14:6 is absolute truth. “Jesus said, I am the way, the truth and the life. No man cometh to the Father but by Me.” L’engle denied the exclusivity of Jesus Christ in her writing. Do that, and you strip Christianity of Christ.

Spare us the faux moral outrage, evangelical blogosphere. All the writers did was follow L’engle’s lead in the film. In this “great warrior” section of the film, Jesus is completely absent. It is a very small step from equating Jesus with Buddha and Gandhi to leaving Him out altogether. In fact, it’s the same thing.

For that lesson, we should thank DuVernay and the writers. When they chose to leave out even a cultural, universalistic Jesus all they could do was leave Oprah on the throne. The Jesus of L’engle’s worldview does not exist. The alternative cannot save itself, much less a movie.

3. Storm Reid, Chris Pine and Gugu Mbatha-Raw all turned in good performances. Unlike their more accomplished cast members, they wanted to be in this film. All three were believable as Meg Murry, Dr. Alex Murry and Dr. Kate Murry. It is just a shame that their believability could not be backed up with good writing, good direction, or good cast support.

So save yourself the money. Pick up the book at Amazon, enjoy the read without taking it too seriously, and enjoy some real writing. If you want, try imagining Reese Witherspoon as Mrs. Whatsit. Whatever you imagine will be better than what you see in this film.