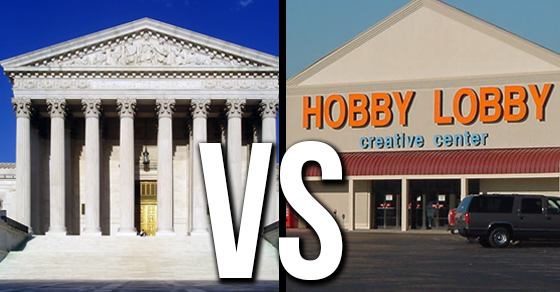 The Supreme Court has a problem. A really big problem. Their desire to be tolerant has backfired on them and now they are in a tough situation that has no positive outcome.

Someone is about to get trampled on by the tyranny of nine justices.

The question is a simple question. Can Hobby Lobby, or any private corporation, run by private individuals, be forced to pay money for employees to have medical procedures that violates the conscience of the owners and shareholders?

The question can be simplified to a single statement; Are corporations people? Can they think, do they stand for something, do they have constitutional rights?

Ultimately the Supreme Court is debating whether or not neutrality exists.

Is it possible for a human being to run an organization in such a way, that he abandons everything he believes. Can someone run a corporation without a worldview?

The answer is obviously no. For neutrality of thought is an impossibility. But we live in a very interesting time and place in history.

Assuming our nation refuses repentance, we get to have front row seats to watch the fall of the largest and greatest Christian nation in the history of the world. What we are seeing take place is a fall into absurdity. A pit of intellectual hopelessness and ridiculousness. A bottomless pit of legal confusion in which the only way out is to have a firm, objective foundation.

Liberals are trying to make the case that corporations are nebulous organizations. They cannot have a worldview. They cannot be for something politically, or hold to any sort of theology, ideas or vision. They just exist.

The other side, Hobby Lobby, is trying to make the case that it is impossible to run an organization without some sort of moral standard or code and for the government to impose a moral code that violates an individual’s moral code is ultimately immoral.

Confused? How about a reductio ad absurdum to make this easier?

Imagine for a moment that Congress passed a law requiring all CEOs to hold a stockholders meeting and place their first born child inside of an oil can and light the child on fire. You are the CEO of Incorporated, Inc. and you along with your stockholders equally agree that this law is absurd and you refuse to follow it. Therefore Incorporated, Inc’s refusal to follow the law means the government comes in and within the next few days Incorporated, Inc. shuts down and the CEO, CFO, COO, and anyone else the government desires is thrown into Martha Stewart’s freshly redecorated prison cell at FPC Alderson.

Liberals would say that Incorporated, Inc. can not have an opinion on the matter. Law is law and therefore in order to have a proper business, Incorporated, Inc. must have a CEO willing to baptize their first born with gasoline and light the match. In essence, the CEO and shareholders, upon offer of employment would have to abandon any and all personal beliefs related to infant infernos.

But wait, it gets more ridiculous. The idea that corporations are not people would also imply that because the CEO is doing it for the company, the CEO has no moral obligation whatsoever for what the Incorporated, Inc. does. Proper logic, properly followed, would insist that companies who do immoral things should not be held responsible for the immorality because corporations are not people.

But we all know that is not the case.

Let’s say you didn’t want your child to become a toasted marshmallow, but insisted in running the business in defiance of the law. Who would then be punished? What if Incorporated, Inc. as voted on by the shareholders, decided to take the first born son of rival CEOs and turn them into burnt toast?

Who would be charged for the kidnapping?

It’s utter absurdity. But the Supreme Court can’t rule against it, because to do so would essentially undo ObamaCare and open the doors for all sorts of discrimination within corporations.

Should the Supreme Court rule in favor of Hobby Lobby, they are also ruling in favor of bakeries to be able to serve whom they desire without also violating their conscience.

So the Supreme Court has quite a situation on their hands. They either rule in favor of Obama Care and thereby destroy private enterprise within the United States or they rule in favor of private enterprise and thereby destroy the ability for homosexuals to have uber rights’ and open up the door for any corporation or individual to simply not follow laws (even good ones) because it violates their conscience. This means that the Supreme Court would then become a moral court, having to rule on every single moral jot and tittle.

And not understanding that is what got us into this mess in the first place.