The Truthiness of Art 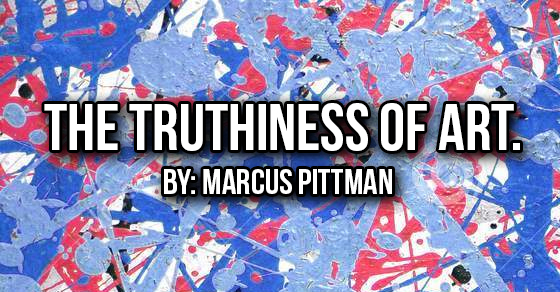 With all the Christian and pseudo Christian films coming out this year, there is a lot of talk about Creative License. Hollywood directors like to use it a lot when they try to make Biblical narratives. Let’s be honest- most of the time they use this term creative license to just make stuff up.

But how far does creative license go? Does it even exist as an actual thing?

One individual commented on one of my most recent blog posts about his fear of such things.

To me ‘creative’ most always means ‘creative license’ which translates to= “it’s kinda like the truth”. No, I’d prefer that a skilled orator teach systematic theology on TBN, or church history or any other number of valuable subjects.” – http://fyre.it/2Ux8iT.4

A quote like this is concerning on multiple levels. It’s concerning for me as an artist, because it shows just how clueless Christians are when it comes to matter of arts and faith. We have a long way to go. We can’t just expect to change Christian film by making Christian films, because there is so much ignorance as to whether or not Christians should even be making films in the first place. Sadly, many people who claim the title “Reformed” seem to pit theology and art against each other.

This is why many Godly Christians have just abandoned Christian art. I don’t blame them. They have families to feed. They can’t make a living with one hand, while using the other hand to defend whether or not that living is even valid. So the result has been an exodus away from distinctly Christian film and television. This is a good thing and God is doing a great thing with the exit. But it’s not good to just abandon the Church to their failed ideas and leave them be.

I think we need to do both.

On one hand we need Christians in the front lines, battling Hollywood dead-on. We need them producing content for secular employers (in accordance with the believer’s conscience), and being promoted into high-ranking positions of influence.

On the other hand, we need Christians staying behind in the trenches. Teaching and motivating others to do the same. We need to teach the Church to be curators of the Kingdom arts.

This is perhaps one of the many reasons I started Gospel Spam. To allow for the discussion of arts and theology to take place side-by-side. So with that…I want to talk about my recent trip to Washington, DC.

After going to the NRB conference, an experience which left me incredibly encouraged and equally depressed, I needed to take a day just to refocus. I decided while I still had the rental car to go the long way home and spend a day walking the Smithsonian museums. I am a huge fan of Jim Henson, and am currently reading his biography. I learned that his recently deceased wife Jane, had given nearly 20 Muppets-including the very first ones from Sam and Friends-to the Smithsonian Museum of American History!

Upon arriving I discovered they won’t all be on display until April. So I saw Kermit, the Ruby Red Slippers and a few Fraggle Rock Muppets, and the Swedish Chef. I had much more time available, so I decided I would walk the National Gallery.

I’ve never been there before, and I was just blown away.

The amazing amount of Iconographic paintings from the 1300’s on up to the Reformation… A Van Gogh and a Da Vinci were on display. Believe it or not I never really spent a lot of time in an art gallery. It was just never something I have done before. I am really glad I did.

The amount of work, use of color, and lighting with paints and oils and canvases was just simply unbelievable! You could see the differences in how the Reformation changed the way people paint. Marshall Foster once told me that Reformation paintings emphasized the humanity of man: paintings of portraits that contained warts and defects, big noses, and missing teeth. But the Greek arts, which were humanist in nature, emphasized the greatness of man. David with his massive hands, oversized genitalia etc.

You could see it. The Gospel influenced the works. There it was on display.

I looked on the internet and discovered another Smithsonian gallery several blocks away off the Mall, in downtown Washington, DC. I didn’t want to spend a lot of time at the National Gallery, because this off-the-mall Smithsonian, The Museum of American Art, had a Motion Picture exhibit going on.

I couldn’t pass that up.

I found out that the American Museum was mainly devoted to displays of postmodern art. Some of the strangest things you have ever seen! One massive display contained a wall of neon and televisions in the shape of the 50 States. Each state had its own montage of random, chaotic videos representing that state. It was weird.

Another display was nothing more than two wooden pallets. One painted black. The other painted white.

Another was an overweight, Mrs. Doubtfire-looking-mannequin eating a sundae, with a tabloid on the table.

And then there were multiple canvases with single strokes or abstract art.

It was a strange place. But it was no National Gallery.

There was a clear difference here. In all honesty, I found it depressing and uninspiring.

These are questions that have plagued curators for years. They’ve never been answered, only debated- much like many of the pieces in that museum.

I think we as Christians are the only ones who can truly answer the question: What is Art?

In order to do so, we need to look at the greatest artist, Christ.

Our first introduction to Christ in Scripture is a demonstration of His creative work.

In the beginning, God created the heavens and the earth.

We know from further accounts in the New Testament that this act of Creating the Heavens and the Earth are directly attributed to Christ.

So the most awe-inspiring creative work in history, the creation of the Heavens and the Earth, were an act of the second Person in the Godhead.

On earth, He still retained these creative attributes.

Is not this the carpenter, the son of Mary and brother of James and Joses and Judas and Simon? Mark 6:3

As a side note, it is interesting to note that within the National Gallery there is an entire floor devoted to the art of carpentry. It contains hundreds of the most amazing wooden chairs, tables and armoires you could imagine, many of which were the very chairs in which our Presidents sat .

So…it is impossible to discuss what is art, without first discussing “Who is Christ?”.

The first thing about Christ we must know is that He is Truth.

He is The Way, The Truth, and The Light.

This is not to say that one cannot create art and not disclose its meaning. For example, many of the strange, weird displays in the Smithsonian Museum of American Art seem to be void of meaning altogether. We just don’t know what the artist’s intention is. But there has to be one. Art cannot happen within a vacuum.

Can black and white wooden pallets laying in the middle of a floor inside an art gallery seem meaningless? Yes. Can they be there intentionally without meaning? Yes. But then it ceases to be art. The artist doesn’t have to tell you what it means, but he does have to concede that it does mean something. Else it’s just wooden pallets that should be thrown away.

Picasso’s most famous painting, “Guernica”, was created after a massive air raid by the German Luftwaffe on the Basque town of Guernica in Northern Spain. Picasso refused to explain the meaning of the painting and it has since been debated for decades. Now obviously Picasso meant something by the painting, else it’s just random and meaningless.

I would argue that art that is void of interpretation and truth is dangerous. Truth is not up for debate. We as Christians shouldn’t attempt to make people guess what we mean.

For example, suppose an individual made a film about Jesus Christ and showed him being placed in the tomb, but just as the rock is rolled into place, we are shown the end credits.

Did Jesus rise again? Is the director telling us he believes that Christ is still dead? When interviewed, the director-who clearly knows about the meaning behind this drastic cut to credits-simply tells distraught viewers that it’s up to them to determine how the film ends.

In that instance, he is placing truth up to debate.

We can see this danger today in films like “Son of God”.

Why is Mary Madeline kicking it with the Apostles so much? Certainly a Biblical case can be made that she was indeed a disciple. Jesus had many disciples, some of which fell away. The Great Commission tells us to make disciples among all the nations, and certainly that includes women and children. It’s within Roma and Mark’s creative license to place her along-side as many events as they choose. I think a Biblical case could be made that she was alongside Jesus for most of his ministry.

Are Roma and Mark trying to tell us that women should be preachers, apostles, and leaders over men? Will they tell us the meaning behind such things? Certainly they had a purpose in it. But why such obfuscation and silence regarding the matter?

Art without truth is dangerous. Christian artists need to create art with meaning, and not allow their creative license to become an excuse for others to distort truth at their expense.

The creative works of God have meaning. We know that God created the heavens and the earth for a purpose to glorify himself. We know that nothing Christ does is without purpose. God does not act on whim, or do something “just because”. His creative acts are not irrational.

Likewise, as we Christians continue to understand and reform art, we should keep a keen awareness to the objectivity of art.

There is a lot more I can say on this issue. I am sure many will disagree. That’s what the comment section is for. But this is not an issue that can be summed up in one post. In the next post I will explain the need for Christians to be skilled artisans. But if you can’t wait that long, I would encourage everyone to listen to a lecture below on “Art and the Artists” I gave last year at the Herald Society.

Previous postHe Must be a Man of God, Before He Is a Man on a Box (Intermission)