A review of Aronofsky’s Noah 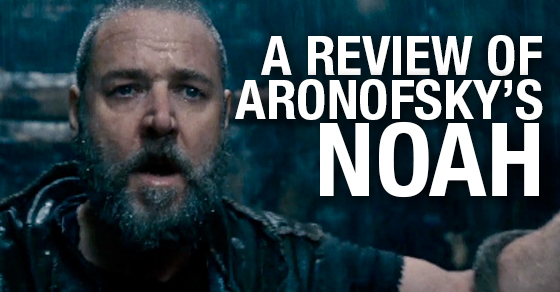 If you were to categorize the Biblical story of Noah into a film genre, it would not be a romance. It would not be a children’s movie. It would not be fairy tale. The story of Noah is about a drunkard who is chosen by God to save the earth from the dark destruction of His wrath. It’s morbid. In fact, I can think of no more horrifying story in all of Scripture. Even the end of the story doesn’t have a happy ending by Hollywood’s standards. Everyone but eight people died. It was complete, worldwide genocide.

In fact it is such a terrible story, very few Christians in all the earth have really dared to tell it accurately via a visual medium. The Church has done everything in its power to turn Noah into a colorful Archie comic filled with bright colors, rainbows, cute animals, and sunshine.

Christians describe a rainy day far more accurately than they have ever described the story of Noah. Remember, for most of recent Church history Noah has been blasphemously portrayed by Precious Moments and church nursery murals.

In recent decades Answers in Genesis, to their credit, has been the most faithful in trying to change people’s minds away from the Sunday School Candy Land version that we all have ingrained in our imaginations. Yet theme parks are fun places to go to be entertained. However, I bet that Ark Encounter, as amazing as it is going to be, will fail to be 100% accurate because, let’s be honest; people will want to go there. I want to go there!

But no one wants to go to the time of Noah.

Except an atheist by the name of Darren Aronofsky.

Aronofsky’s Noah starts out with a breathtaking, animated retelling of the Biblical lineage starting with Adam and Eve, to Cain and Abel. One can sense the excitement in the audience during the first 60 seconds. That is, until we learn of t The Watchers, who are fallen angels covered with volcanic ash. Men fought and destroyed them along with the earth, which is now an empty, mined, wasteland. But we persevere…

Noah, who is played by Russell Crowe, learns from two visions: one via a dream, and another one via an LSD trip from a spiked cup of tea, given to him by his Grandfather Methuselah (Anthony Hopkins). Noah learns that The Creator is going to destroy the world for their sins and abuse of the earth.

Noah sets out to build an ark, but not without the help of – giant, fallen-angel, rock monsters who, for reasons unknown to anyone in the audience (made obvious by the muffled laughter), work tirelessly to help him.

There are moments that are breathtaking: the pair of doves flying through the earth to reach the ark, along with multitudes of birds, and mammals and reptiles. The flood waters: starting with the first drop that hits Noah on the head, to the waters that burst forth from the deep. One of the most frightening sounds I have ever heard in cinema was the muffled sounds of screams, cries, and weeping of the drowning souls that torment Noah from within the ark during the early storm. And the silence of a hurricane-covered earth from space was deafening.

The scene of Noah walking through the pre-flood civilization was one of the most fantastic displays of human depravity I have ever seen, and all without causing an actor to sin in the process of filming it. The scene served as proof that immorality can be portrayed morally. The pre-flood world is shown for the wickedness that it really was.

The sunset silhouettes, the enormity of the ark, the gorgeous cinematography…these moments were so beautifully crafted, stunning and (to the shame of every Christian film maker in decades), made me forget I was watching a film created by an atheist.

But then comes the splash of cold water as a reminder.

Creative license is like a rubber band. It can only be stretched so far before it snaps, injuring the one who is pulling it. In this case, the one doing the pulling is an atheist, Darren Aronofsky. The injury he receives is the laughter of the audience who, strangely enough, fails to make his fictional story to be anything near believable.

I got the impression the audience was really hoping for a great film, but all they got was a load of strange interrogatives. Why are fallen angels helping Noah? Has humanity become so wicked that fallen angels are pleading with God to escape the earth? Since when do fallen rock monsters receive grace? Noah doesn’t allow his two younger sons to take a wife on the ark? Why on earth is there a male stowaway aided by Ham?

These scenes are so incredibly ridiculous that the audience was laughing during what was supposed to be serious scenes in the film. I have never been to a film where the audience laughed out loud AT the foolishness of a story.

As the movie ended and the credits began, laughter from the audience escalated. Someone whom I have never met shouted What Bible was he reading?!

The laughter escalated. As a director, that is perhaps the worst possible reaction one could receive from your audience.

The rubber band of creative license snapped back and hit the Aronofsky in the face.

And it’s a shame, too. Because according to Darren Aronofsky, this film was his dream since he was a teenager; now his dream is a joke.

One of the key plot points in the film was Noah’s struggle with mercy. Noah felt that no human being-even his family-deserved to be on the ark or live. Why is Noah able to watch the judgement of God from the safety of God’s own protection? Noah had a front row seat to a foreshadowing of a day yet to come:

The day when God judges the world.

But unlike Aronofsky’s Noah, who was chosen because of his love of creation and inner goodness, the Biblical Noah had no works to offer. His righteousness was credited to him through Christ alone. Noah rightfully had no business being on the ark.

That plot point would have been tremendous and completely worth exploring, unperverted by the distractions, if told within the bounds of creative license. Instead, the target audience is treated to Aronofsky’s middle finger. The response was mockery–not applause. Laughter–and not awe.

Perhaps that is a good thing. Perhaps Hollywood now knows its limits when retelling stories in which the audience holds dear. Even fairy tales have to retain some resemblance to the core of their parent story. The Wizard of Oz can become Wicked. Sleeping Beauty can be seen through the eyes of Maleficent. And Superman can be seen through the town of Smallville. But in each of these instances, the new story holds in high regard-and only serves to compliment-the original.

This is the balance of trust a director and an audience share in recreating beloved classics. And this was not just missing from Noah.

It was not even on the same boat.

But then again, maybe Aronofsky just assumed that after years of Christians purchasing blasphemous Precious Moment versions of Noah from their own bookstores and decorating their own nurseries, that Christians just didn’t care how it was portrayed.

Previous postAbortion Abolition is Not the Gospel