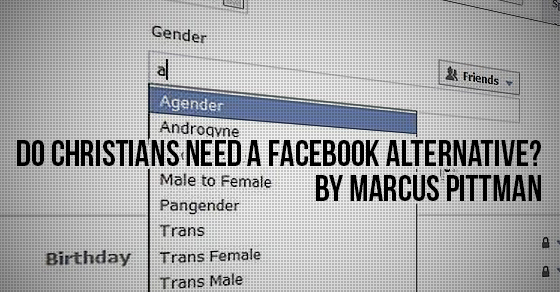 In what can only be described as a joke, Facebook announced they are adding upwards of 58 new gender identities for people to choose from. Everything from transgender male, transgender female, trans-male, trans-female, trans with an asterisk (whatever that means), Non-binary and a whole bunch of other weird half-breeds- including centaur.

Now, now, I’m just kidding. There is currently no option to describe your sex as a centaur…yet.

What’s next? 58 ways to define whether your post was made in the morning or during the night?

In all seriousness, this is real. Well, those classifications are not really real. They exist in the mind of God-hating humanists. But still… you get the point. Facebook is run by inventors of evil.

Perhaps they are just under so much pressure from the radical, rabid, gender destroyers on the left, that they thought it would be funny to just give in to the destroyers’ demands, and thus expose them for the utterly ridiculous group of people that they are.

So that’s it then. A satire. A satire on the human race.

If that’s the case, what do we do?

Do we leave Facebook? Stop giving them money to promote our posts? Retreat into our own little homemade Christianized version of Facebook? Make our own Girl Scout Cookies?

We did that for film, television, and chicken sandwiches. It only worked well for chicken sandwiches, but in that instance, the Christians “invented the Chicken Sandwich.” So everything else is purely a pagan imitation of fried chicken and a hidden pickle on buttered bread.

We don’t retreat to our own little Christianized He-Man Woman Haters treehouse club. Christians march towards the gates of hell. They don’t create their own little path in the opposite direction.

Christians are to be the innovators! The pioneers! The leaders and forward thinkers of society! This cannot happen when we retreat at the first sign of apostasy from our favorite social media website.

If we abandon Facebook, we must abandon Twitter and every other social media platform in existence for the same reasons. We’d then essentially be left with snail mail, which we couldn’t use either, because with every USPS “Holiday” stamp you buy, you also support the government. And everyone knows the government supports Planned Parenthood.

Facebook has changed the way the world communicates. It’s not just any social media platform. It’s a tool. You can’t make a Christian version of a hammer.

So then what do we do?

Secondly. We need Christians to invade the Facebook and Silicone Valley workplace! We need Chritians to be excellent coders and engineers! To be brilliant and innovative! To become leaders! To charge the gates of hell directly! And to become friends with Mark Zuckerburg.

Thirdly, and most importantly: We need Christians to strive for something bigger than imitation. How dare Christians for one second blaspheme the Creator God by copying someone else’s idea and making a less-satisfying copy of something for his Bride? Why think so small?

Why not create something far more innovative than Facebook ever was or will be? We did it once, right? The printing press? Or twice, right? Hospitals?

Why do we always think of imitating the world, instead of transforming it? Why don’t we work hard on technology so new, that the owners of said technology would literally financially control Silicon Valley and be able to tell Facebook to fall in line, or else eat dirt?

Wouldn’t our God, who glories in our glory for His namesake, bless such a venture? Certainly He would.

Capitalism, like the government and the Church, is God’s own little tool for fighting evil. Christians always talk about free-market capitalism…but they haven’t figured out how to wield it as a sword yet.

Previous postA Man of God, Before a Man On a Box. (Part 1)